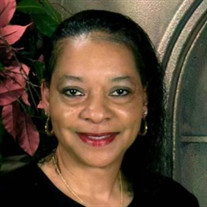 “Now faith is the substance of things hoped for, the evidence of things not seen.” Hebrews 11:1 Viola Stephenson Simmons, the fifth child of the late James Stephenson Jr. and Elizabeth Tann Stephenson, was born on December 28,1949 in Murfreesboro, NC. On Monday, September 6, 2021, she took her last breath surrounded by family and friends in the comfort of her home in Portsmouth, VA, to which she completed her final chapter and entered her home of eternal rest. Viola or “Vee” as she was known to her husband accepted Christ at an early age and later joined Mount Caramel Baptist Church in Portsmouth, VA where she remained an active member until the sudden decline of her health. She attended public school at CS Brown High School in Hertford County and graduated in 1968. Upon graduating high school, she attended Roanoke Chowan Technical Institute where she met the love of her life, Graylin D Simmons Sr. After Graylin enlisted in the military, both Viola and Graylin wed on May 9,1970 in Ahoskie, NC. After being stationed in Portsmouth, VA, both Graylin and Viola transitioned from Ahoskie, NC to Portsmouth, VA to live in base housing. After spending a few years in base housing, both Graylin and Viola settled into their forever home where they raised their two children: Monique U Simmons (Monk) and Graylin D Simmons Jr. Viola worked at Portsmouth City Circuit Court for 30 years. She had an administrative role at various levels in the Circuit Court. She issued marriage license, filed legal documents for Partnerships/UCC Financial Statements, and Judgements, administered service to the general public and lawyers, assisted and responded to phone inquiries and collected fines and fees. Viola retired in March of 2012. Viola was a loving daughter, sister, mother, grandmother, aunt, niece, cousin, neighbor, and most importantly a friend. She was a feisty young woman who could light up a room and have you “hollering” from one side of the room to the other. She was most known for her cooking and baking especially at church functions where the congregation was lined up outside the door for her home cooked meals. Viola always wanted to do her best for those she loved and cared for. She was never too busy to lend a helping hand for those who needed her. For these qualities, she will be forever missed and remembered by all who knew and loved her. In addition to her parents, Viola was preceded in death by her two siblings: James Jacoba Stephenson and Louvenia Coleman. Viola leaves to cherish and to reflect upon her many memories and legacies: her loving and devoted children: Monique U Simmons (Monk) (Franklin) of Chesapeake, VA, and Graylin D Simmons Jr. of Portsmouth, VA; her precious grandchildren Briana S Monk (Fields) (Brandon) of Sneads Ferry, NC, and Kayla and Nia Monk of Chesapeake, VA; her loving siblings: Margaret Hinton of Chesapeake, VA, Paul H. Stephenson (Vesta) of Murfreesboro, NC, and Geneva Griffin (Clarence) of Atlanta, GA, her sister in Christ, Carolyn Elliot and a host of other nieces, nephews, relatives, and friends.

&#8220;Now faith is the substance of things hoped for, the evidence of things not seen.&#8221; Hebrews 11:1 Viola Stephenson Simmons, the fifth child of the late James Stephenson Jr.... View Obituary & Service Information

The family of Viola Stephenson Simmons created this Life Tributes page to make it easy to share your memories.

“Now faith is the substance of things hoped for, the evidence...