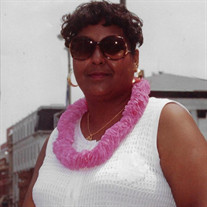 One day, two young trees used to blow in the wind minding their own business attempting to learn what life was about. One day, as they began to get older and the branches became longer their leaves touched one another. Each time the wind would blow in a particular direction the leaves would continue to get closer and closer. As the two trees became older and stronger the branches of both trees became one and then the roots became entangled never to be broken apart! These two trees created their first seedling and BOY, was she beautiful inside and out. The couple were excited about their first young seedling and they agreed to name her Theresa Elizabeth Hunter. Doris would bath, nourish and dress her new seedling like no other mother. So, one day her parents shortened her name and began calling her Treasa and as time matured Treasa became Tree. Theresa Hunter Jennings was supported and accompanied by her lord and Savior with leaving this earth on December 31, 2020. She is and forever will be known as our mother, your aunt, cousin to many and the niece or great niece to many others. Theresa is the First Born sister to 5 brothers and one sister and they will personally tell you that Theresa was like a mother to them for a period of time as the parents supported the family, as all families do. She was born in Norfolk Virginia and raised in Portsmouth Virginia where she remained for her adult life. Theresa’s parents are a beautiful married couple Named Charles Frederick Hunter Jr who went on to heaven on November 24, 2003 and Doris Vernell Colden Hunter who also entered her heavens on April 16, 2020. Theresa had a beautiful relationship with her parents but the one that blossomed between her and our grandmother was unmatched and unattainable by anyone. They had twin characters that was guided by their Lord. They both would speak bible verses back and forth coupled within their daily dialogues with each other and the family. If you have ever went to them with a problem, you would walk away hearing a bible verse or two. Theresa maintained employment with the Portsmouth public school board where she would retire from. Theresa loved children and people alike. Theresa had a green thumb and was a true botanist as time would go on. She didn’t grow her on food, but she loved to have other vegetation in and outside of her home just like her father. Theresa could also draw very well just like her father and later her brother Nathaniel became a great artist. One thing that Theresa loved to do as her time passer, was write poetry and listen to her music, such artist as her favorite Aretha Franklin, The Winans and several other gospel groups. Theresa is survived by her three children Kevin, Rhonda and Derrick Jennings. Theresa has brothers and a sister as well named Charles, David, Edward, Nathaniel and Clayton and sister Janice. Theresa also has sister in laws named Adell, Sissy, Sherry and Karen who are and forever will be Family. Nephews Charles, Johnathan, Daniel, Edward, Phillip and Nathaniel JR and Jordan. Nieces are Davida, NeeNee and KeeKee and their children. It would be unfair not to thank her siblings that supported her in anyway throughout her life here on earth. Special thanks to our uncle Edward for supporting us with Vergus pizza and our Uncle David who knows everything almost about anything for supporting Doris and Theresa on many mornings with breakfast, personal care and companionship. In addition, the many others who visited as well. Now we go ahead and walk this road called life knowing that you were all touched in some way, raised and Loved by Theresa, Treasa, Tree Elizabeth Hunter Jennings At this time Theresa’s children would offer thanks to everyone for taking time out of their personal schedule to participate in Theresa’s home going and called to offer condolences to our family.

One day, two young trees used to blow in the wind minding their own business attempting to learn what life was about. One day, as they began to get older and the branches became longer their leaves touched one another. Each time the wind would... View Obituary & Service Information

The family of Theresa Jennings created this Life Tributes page to make it easy to share your memories.

One day, two young trees used to blow in the wind minding their...

Send flowers to the Jennings family.