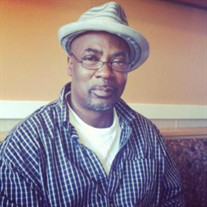 On Sunday July 18th, 2021 a beloved father, grandfather, brother, uncle, cousin, and friend was called home too soon. Theodore Roosevelt Terry, affectionately known as Ted or Thedo, was born on October 18, 1961 in Portsmouth, VA to the late Isaiah and Beulah Terry. He was educated in the Portsmouth Public School System. Theodore was a laborer at Tidewater Caulking and Waterproofing for over 15 years and was also a skilled painter. He was an avid fisherman, cyclist, and dog lover. Theodore was the life of every party and his dance moves were unmatched. He had an unforgettable walk and was a smooth talker. Theodore loved his family and was everyone’s favorite uncle. To know him was to love him. Theodore was preceded in death by his parents Isaiah and Beulah Terry, brother Isaiah Terry and sister Sarah McIntyre. He leaves to cherish his memory, three daughters: Shunita Johnson of Virginia Beach, VA, Monique (Carl) Parrish of Hampton, VA, and Ashley Strand of Suffolk, VA, one son: Theodore Johnson of Virginia Beach, VA. Three brothers: James (Cynthia) Parker of Chesapeake, VA, Carl Parker of Chesapeake, VA and Arthur Terry of Herald, California. Three sisters: Wanda (Jerome) Smith of Chesapeake, VA, Anita Parker of Chesapeake, VA and Andrea (Derick) Johnson of Chesapeake, VA. Seven grandchildren: Tylik, Kemarion, Jacob, London, Camryn, Trenton, and Taylor Rose. His sweetheart Teresa Driver of Newport News, VA. Lifetime friend and mother of his children Mary V. Johnson of Chesapeake, VA and a host of family and friends.

The family of Theodore Terry created this Life Tributes page to make it easy to share your memories.

Send flowers to the Terry family.