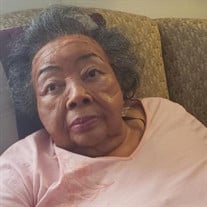 In the early morning hours on Tuesday December 21, 2021, at 2:30 AM, our beloved mother Shirley Lucille Ellis Williams transitioned to paradise with her children by her side. Her children always told her she was the best mommy in the whole world; for her children she was and will always be. She was the eldest daughter of Percy Clarence and Doris Lucille Ellis who proceeded her in death. She was the ever-present sister for her loving siblings Yvonne Marie Redwine and Vickie Ann Percine Ellis. Shirley was born February 22, 1937, in Harlem Hospital in New York, New York. She was a graduate of I.C. Norcom High School in Portsmouth, VA as well as being a Cum Laude Graduate from Norfolk State University an HBCU, where she attained a Bachelors Degree in Early Childhood Education. She was also proceeded in death by her husband Earl Lee Williams, Sr., one son Earl Lee Williams, Jr., twin daughters Joyce Ellen and Jennifer Annette Williams, and one Granddaughter Ashley Jasmine Smith. Shirley was joined in holy matrimony to Earl Lee Williams on January 7, 1956, in Portsmouth, Virginia. To that union were born six children, Terry Suzanne Smith, Earl Lee Williams Jr., (deceased), Joyce Ellen (deceased) and Jennifer Annette Williams (deceased), Faron Anthony Williams, and Sonya Kay Williams to whom she was a devoted mom. Shirley was a dutiful and consummate Air Force Wife who created a loving home environment where her family thrived; wherever the duty station she faithfully prepared the home to function for the family’s comfort and work or school activities. Shirley worked for the Chesapeake Public School System as a Teacher’s Aide and a Home School Worker; following her husband’s retirement from the service and after her children finished public school, she embarked on a career as a kindergarten teacher with the South Hampton Public School System. This career was second nature for her as she often taught her children pre-K work in her own home, even writing books and providing boxed lunch for her “students”. Shirley was a long standing and active member of the Historic Zion Baptist Church in Portsmouth Virginia while her health permitted. During her tenure she was a part of the Sanctuary Choir, a founding member of the Active Women of Zion (AWOZ), a member of the Board of Christian Education, past member of the Pastors Search Committee, a member of the Women’s Sunday School Class as well as being a past Youth Sunday School Teacher. Shirley was participant in multiple Women’s Bible Study courses at Deep Creek Baptist Church. She was a member of Red Hatters and a past member of Jack and Jill’s Chesapeake Chapter. Shirley is survived by Terry S. Smith (Tunstille) of Richmond, VA, Faron A. Williams (Pamela) of Bealeton, VA, Sonya K. Williams (Garland James) of Havelock, NC, Sisters Yvonne M. Redwine of Tyler, TX, Vickie A. Ellis, of Suffolk, VA, a sister-in-law Lillie B. Williams of Portsmouth VA, Special son Todd E. Frazier of Portsmouth, VA. She also leaves her grandchildren Tunstille C. Smith II (Isis Sanders) of Richmond, VA, and granddaughters Jordan M. Thirus (Jasmine) of Richmond, VA, Evan E. Williams and their mother Rev. Emmetri Beane of Culpeper, VA and Richard C. Schlaff, Los Angeles, CA. She also leaves one Great granddaughter Brielle S. McClary of Richmond, VA. Additionally she leaves special cousins Erma Butcher and Joseph Turner, a special daughter Marion B. Fagan and a host of nieces, nephews, cousins, and friends.

In the early morning hours on Tuesday December 21, 2021, at 2:30 AM, our beloved mother Shirley Lucille Ellis Williams transitioned to paradise with her children by her side. Her children always told her she was the best mommy in the whole... View Obituary & Service Information

The family of Shirley Lucille Williams created this Life Tributes page to make it easy to share your memories.

Send flowers to the Williams family.