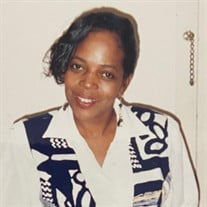 On January 10, 1955, Sharon Jeanetta Reed graced this world born from the late Mack "Tee" Graves and Florence Harper Graves in Detroit, Michigan. Blessing the lives around her as a force full of grace and tenacity, she earned her wings on August 22, 2021. Sharon had a work ethic like no other. She worked numerous jobs, from delivering papers to convenience store clerks, before finding her career with the Norfolk Naval Shipyard in 1998. As a nuclear painter, she traveled the world experiencing the cultures of Italy, France and Japan just to name a few. Her open heart and large personality allowed her to make friends with ease. She never met a stranger. When she wasn't sharing laughs on the phone with friends, she was enjoying one of her favorite past times of cooking. She also enjoyed shopping for her grandchildren. On any given day, she could be found watching home improvement and cooking shows, and cheering on her beloved Miami Dolphins. In 2010, she became a member of Order of Eastern Star, Ruth Chapter #30. Preceded in death by her parents, Sharon is celebrated in life by her daughter Lakeisha Coffey (Virginia Beach, VA) and son Raine Reed III (Portsmouth, VA); grandson Camron Graves (Raleigh, NC) and granddaughter Raina Artis (Chesapeake, VA); sister Valerie (Norman) McKenzie (Lithia Springs, GA); brothers Michael Graves Sr. (Wetumpka, AL) and Larry Graves (Tuskegee, AL); nieces Sharonda Graves (Montgomery, AL) and Normanie McKenzie (Atlanta, GA); nephews Michael Graves Jr. (Auburn, AL) and Norval McKenzie (Nashville, TN); and a host of aunts, uncles and cousins. Although small In stature, her huge heart allowed her to develop lifelong sisterhoods with Tara (Rod) Jackson, Angela Lewis and Sharon (Lee) Walker. Her love extended to her godchildren Justyn (Tiffany) Little, Kentara (Wes) Johnson, Jordyn Lewis, Tarkenyia Williams, Jaylen Lewis and Trey Jackson.

On January 10, 1955, Sharon Jeanetta Reed graced this world born from the late Mack "Tee" Graves and Florence Harper Graves in Detroit, Michigan. Blessing the lives around her as a force full of grace and tenacity, she earned her wings on August... View Obituary & Service Information

The family of Sharon Reed created this Life Tributes page to make it easy to share your memories.

Send flowers to the Reed family.