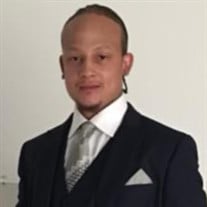 Early Sunday morning, May 23, 2021, God called his son, Schuyler Omar Hardy, home after a short 33 years. He was a loving son, brother, father and friend. Schuyler accepted Christ at a young age of 12 at Gethsemane Community Fellowship Baptist Church in Norfolk, VA, and he knew how to call on him whenever he fell down. He was predeceased by his father John M. Hardy Jr., his grandparents Catherine Corbin and William Coleman, Gloria Hardy and John Hardy Sr. He leaves behind to cherish his memories his children Zy'Asia, Skyla, Sariyah, and Zion, his mother Adrienne Hardy-Daniels, stepdad Dwayne Daniels, sister Johnay Hardy and half siblings Leander Hardy, Tonya Reid and Terrance Cross, an uncle Jeffrey Coleman, aunts Gloria Hardy and Melvina Snead and a host of cousins and extended family and friends. He also leaves behind special friends Lateel, Desiree, Maranda, Sam, Marquez, and James. Schuyler was a graduate of Lake Taylor High School and attended Tidewater Community College. Schuyler was given many talents by the Lord; he was the owner of Tidewater Finishing, a precise barber, avid free hand and tattoo artist, a saxophone player, and a home improvement/carpenter wiz. He acquired his dealers license due to his love for cars. His most prized possessions were his children, who he showered with love and gifts continuously. Schuyler will be remembered by all for his generous, giving spirit, his comedic personality, and his swag.

The family of Schuyler O. Hardy created this Life Tributes page to make it easy to share your memories.

Send flowers to the Hardy family.