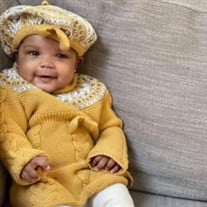 Our Precious Sami was born on October 27, 2020 to her loving and devoted parents, Sammie and Karia Gladden. Unexpectedly, &#8216;Baby Sami&#8217;, as she was affectionately called, departed her earthly life on March 27, 2021 at just five months... View Obituary & Service Information

The family of Sami Jenae Gladden created this Life Tributes page to make it easy to share your memories.

Send flowers to the Gladden family.