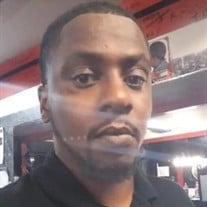 A very special young man began his life on February5, 1991 when Reginald DéAngelo Wilson was born in Norfolk, Virginia. On that day, Melanie C. Cuffee and Victor R. Wilson welcomed their beloved son to the world. He is preceded in death by his maternal grandmother, Francis Speight, paternal grandparents, Mary Lee Wilson and Percy Whitaker, and maternal great-grandmother, Rachel Speight. A mighty warrior, Reggie weighed in at 1 pound, nine ounces, born four months early. He proved that he would defy all odds against him when he kicked out his IV and oxygen lines and began to thrive on his own. He went home after three months in the neonatal intensive care unit; and so, his journey of strength, perseverance and bravery kicked off. Reggie received his formal education through the Chesapeake and Portsmouth Public Schools systems. He graduated from I.C. Norcom High School, Portsmouth, Virginia in 2009. As a student he polished his skills as a trumpeter. Reggie was a member of the concert and marching band and played the trumpet for church morning worship services. He joined and was baptized at New Saint Thomas Baptist Church at the age of six years old. As an active member of NST, he served as a youth usher and member of the youth choir. As a teen, he served as a Vacation Bible School recreation leader. The traits of a hardworking man were instilled in him at an early age and carved out his professional and personal life. Reggie launched his career as a hard and dedicated worker. His experiences ranged from working for the State of Virginia to the restaurant industry. Using work as a driving force in his life, he served as a motivator for his peers until the very end. Through the years, he forged relationships with a vast amount of people from every walk of life, having the strong ability of never meeting a stranger. His personality drew people to him. He loved his family, adored his friends, and considered himself a blessed man. He had a gracious soul and never felt it robbery to go out of his way for another. Though he may have finished the race early, he leaves adored loved ones to mourn his memory. Reggie was a great man who lit up every room he entered. He was so personable and was quick to make people feel like they had known him for a lifetime. He was a loving son, brother, nephew, cousin, and friend. Those who remain to cherish his wonderful memory are his parents, Melanie C. Cuffee and Victor R. Wilson; his sisters, Lanaya Cuffee, Carla Wilson, and Lavichia Wilson; aunts, Glenda Wilson, Sonya Wilson, and Rosalyn Cook; uncles, Thomas Wilson and Cleveland Wilson; very special friends, Delano Alston, Paul Turner, Jalen Southhall, Emona Wilson, and numerous cousins, close relatives, and friends. His memory will live on as his loved ones will fondly reflect on his loving spirit. There is pleasure and comfort in knowing that his soul has now returned to the glorious source from whence it came. Yes, he will be missed in body, but his spirit and memories will live on. Wipe the tears from your eyes and smile; that’s what Reggie is doing! His warm smile was a true reflection of his personality. He leaves a legacy of love, friendship, and happiness — teaching us to enjoy life to the fullest and appreciate each and every day with those you love.

A very special young man began his life on February5, 1991 when Reginald DéAngelo Wilson was born in Norfolk, Virginia. On that day, Melanie C. Cuffee and Victor R. Wilson welcomed their beloved son to the world. He is preceded in death by... View Obituary & Service Information

The family of Reginald De'Angelo Wilson created this Life Tributes page to make it easy to share your memories.

Send flowers to the Wilson family.