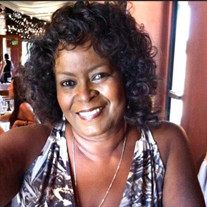 Patricia Denise Matthews, affectionately called “Patsy” by childhood friends and family, was born in Brooklyn, New York on March 28th 1953 to parents Amelia (deceased) and Fredrick Harper. A fun loving woman with a lot of personality and very little hesitation to speak her mind, Pat was loved by all who met her. She was a devoted wife of 34 years to Bennie Matthews and the best Mom to their daughter, Harper Matthews (and fur baby Onyx, their chihuahua beagle). Pat lived a full life that spanned across 4 states. After a 17 year career at Avon in New York City, life (and love) moved her west. Pat spent 30+ years in sunny southern California, where she was an active member of Friendship Baptist Church in Yorba Linda and a paraprofessional in Special Education at Johnson Middle school in Westminster. She loved making friends, drinking piña colada’s, singing in the choir, serving in the church women’s ministry, praying with her Sisters Circle prayer group, traveling with her hubby, managing her daughter’s very busy extra curricular activity schedule, and having a whole lot of fun while doing it all. As she stepped into retirement, Pat and Bennie relocated to Atlanta, Georgia and recently moved to Virginia to be closer to family. Patricia went home to be with her Lord and Savior on September 25th, 2021 after a long 8 year fight with Kidney Disease. Pat was an inspiration to all as she never let her health hinder her from living her life fully or impact her deep faith in Christ, living by the motto of “Gods Got It” Patricia’s legacy will be carried on by her Husband (and best friend), Bennie Matthews and their Daughter, Harper Matthews. Her Father, Fredrick Harper. Step Mothers , Carol Harper and Virginia Harper. Her sisters, Barbara Harper and Jencie Grissom. Step- Brother Billy Lambert. Sister-in-laws (Benita Reed, Nannette Chapman, Yvonne Brooks). Brother-in-law (Larry Chapman). Cousins (Diane Leslie, Marlene Leslie, Renee Harper, Zoie Leslie). Nieces (Shanice Plato-Talley, Tiffani Gatson, Deanni Dalrymple, Nyah Talley, Kristi Gatson, Candice Brooks). Nephews (Rodney Jones, Justin Gatson, Larry Chapman jr., Shaunessy Chapman, Rasheem Skinner). Many more great nieces and nephews and a long list of friends all around the country.

The family of Patricia D. Matthews created this Life Tributes page to make it easy to share your memories.

Send flowers to the Matthews family.