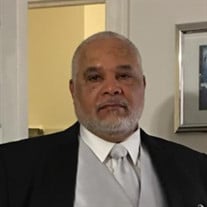 On the afternoon of Saturday February 19, 2022, Pastor Glenn R. Wade was called to eternal rest with his Heavenly Father. He was the oldest of two sons born to the late Horace and Mae Belle Wade on April 13, 1954, in Portsmouth, VA. Glenn was educated in the Portsmouth Public School System. He graduated from I.C.Norcom High School in 1973. Upon graduation from high school, Glenn attended Tidewater Community College before enlisting in the United States Airforce in 1975. He served his country for four years. During enlistment, Glenn accepted Christ as his Lord and Savior. Glenn’s call to Christ was the result of his mother’s prayers and the tutelage and mentorship of his childhood pastor, the beloved Elder Samuel Moore; New Garden of Prayer No. 4 Church of God in Christ. As he further developed his Christian walk, Glenn later served on the Board of Deacons at Centennial Baptist Church, Portsmouth, VA. In 2001, Pastor Wade was licensed and ordained to ministry at New Beginning Christian Center where he served as an Assistant Pastor and presided over the Ministers on Call Ministry. Glenn married the love of his life, Mary H. Chisholm in 1999. They shared in the marriage ministry and founded Marriage by Divine Design. Their ministry offered marriage counseling and the officiating of marriage ceremonies. Glenn was employed as a Master Electrician with the Newport News Shipyard for well over 30 years. During his tenure he led noon day bible classes for co-workers where he executed his passion for evangelism and discipleship. The memories of Pastor Wade’s life shall be cherished in the hearts of his wife Mary Wade of Portsmouth, VA; one brother Rev. Horace Wade, Jr. (Sylvia) of Chesterfield County, VA; aunts Hazel Matthis of Jacksonville, NC and Margaret Pickett of Los Angeles, CA; two brothers-in-law Alfonzye Chisholm, Jr. (Laura) of Fort Washington, MD and Bishop James Chisholm (Vernetta) of Portsmouth, VA; nephews Horace Wade, III (Natasha) and Rev. David Wade (Brandi) of Chesterfield County, VA, great-niece Christina and great-nephews Joshua, Jeremiah, and Jonathan of Chesterfield County, VA; cousins Nellie and Joshua Maletta of Columbia, MD, Susan Pickett-Allen of Minneapolis, MN, Cynthia Pickett-Patterson of Los Angeles, CA and Rev. Tyrone Johnson of Waldorf, MD; devoted friend Von Jordan of Hampton, VA and an abundance of cousins, friends and a loving church family

On the afternoon of Saturday February 19, 2022, Pastor Glenn R. Wade was called to eternal rest with his Heavenly Father. He was the oldest of two sons born to the late Horace and Mae Belle Wade on April 13, 1954, in Portsmouth, VA. Glenn was... View Obituary & Service Information

The family of Pastor Glenn Wade created this Life Tributes page to make it easy to share your memories.

Send flowers to the Wade family.