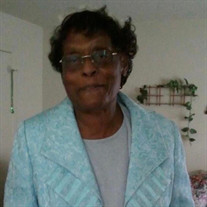 Pastor Berthamae Dudley Knowlton received her crown on Monday, May 10, 2021. On December 22, 1928, Berthamae Dudley was born to the late Rev. Samuel Dudley Sr. and the Late Hattie Smith Dudley. Originally from Greenville, NC, she was rooted in the Hampton Roads area of Virginia. She attended Booker T. Washington High School in Norfolk, VA. She went on to become a Master presser within her occupation working at Albano Cleaners in the 1950s. In later years attended Norfolk State University where she studied music under the distinguished Dr. Freeman. On October 6, 1958 in Camden County, NC she married the late Elder Thurston C. Knowlton and was married until his death in 2005. Pastor Knowlton loved and help raised most of the children in her family. She was affectionately referred to as “Grantee” by various family members. For over 20 years she and her husband were foster parents and taught foster-parenting classes for the department of social services. Pastor Knowlton was ordained into ministry at fifteen years old and went on to served in many capacities of the church. In 1994 she was sent to serve along side with her husband at St. Stephens’s Church of Christ Holy Disciples. Mother Knowlton, as a she was affectionally referred to, served along side her husband until his death in January 2005. She was then installed as pastor of St. Stephen’s in February 2005 and served as Pastor until her death. She is preceded in death by her husband the late Elder Thurston C. Knowlton, 3 sons; Marlowe Knowlton, John R. Hill, and William Downing, and 9 of her siblings. Left to cherish her memory is 1 son; Charles Ronald Morris “Ronnie” of Suffolk, VA., 2 daughters; Crystal D. Harvey (Calvin) of Baton Rouge, LA and Dominique L. Knowlton- Humphrey ”Missy” (Brion) of Chesapeake, VA, 1 sister; Mavis Williams (Roy) of Greenville, NC, 1 brother; Joe Louis Dudley (Peggy) of Greenville, 7 grandchildren, 5 great-grand children, and a host of relatives, sons and daughters in ministry, church family, and friends. She left a legacy to her family of God’s amazing love and

Pastor Berthamae Dudley Knowlton received her crown on Monday, May 10, 2021. On December 22, 1928, Berthamae Dudley was born to the late Rev. Samuel Dudley Sr. and the Late Hattie Smith Dudley. Originally from Greenville, NC, she was rooted... View Obituary & Service Information

The family of Pastor Bertha Dudley Knowlton created this Life Tributes page to make it easy to share your memories.

Send flowers to the Knowlton family.