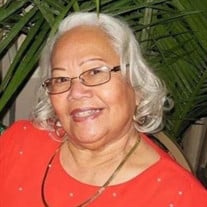 Natividad Mabali Hardy entered eternal rest on Tuesday, January 26, 2021 at the age of 85. She is preceded by her parents Delores Mabali and Roque Labata and her husband Ernest Hardy, Jr. and survived by her three children, Pamela Paz Tudtud-Nixon (George Nixon, husband), Francisco Antolin Hardy (Charlette Hardy, wife), Anastacia Yvetta Hardy-Lewis, four grandchildren, Joshua George Nixon, Tyler Steven Lewis, Victoria Pamela Nixon-Evans (DeVaughn Evans, husband) Sebastian Charles Hardy, in-laws, Cornelius Hardy, Anthony Hardy, Dianne Johnson, Delores Bowman, and a host of family and friends. Natividad, or more affectionately known as Naty, was born on June 24, 1935 in her hometown of Saint Bernard, Southern Leyte, Philippines. During her time in the Philippines, she attended Saint Catherine School in Cancar, Cebu City. Naty was known for excelling at many things. In her younger days, she was a cheerleader, professional singer, social event organizer, while in the Philippines. In 1963, Naty married her adoring husband, Ernest Hardy, Jr., and soon after moved to Portsmouth, Virginia. She brought her hardworking and strong will to the United States where she retired as a seamstress from London Fog. Naty was well known for her love of singing, dancing, word searches, solitaire, mahjong, and chocolate muffins. Naty was a woman of few words, but of much influence. She was respected, loved, and regarded by everyone she met. Even though she lived a methodical life, she expressed her love in many ways. Naty was well known for her astounding crochet skills, and often gifted her creations to her friends and family. If you visited the house, you would most certainly leave with a hat, a scarf, or slippers. In many ways, Naty was much like her crocheted gifts; meticulous but full of love. Her love stretches farther than the yards of yarn she crocheted over the decades and will last longer than her time here on Earth. She will be loved and missed by all of her friends and family.

Natividad Mabali Hardy entered eternal rest on Tuesday, January 26, 2021 at the age of 85. She is preceded by her parents Delores Mabali and Roque Labata and her husband Ernest Hardy, Jr. and survived by her three children, Pamela Paz Tudtud-Nixon... View Obituary & Service Information

The family of Natividad M. Hardy created this Life Tributes page to make it easy to share your memories.

Send flowers to the Hardy family.