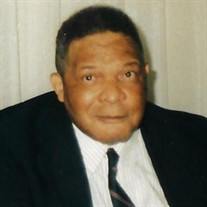 Morris Clark, 83, peacefully transitioned on November 21, 2021, in Chesapeake, Virginia. He was born in January 1938 to the late Theodore and Geneva Clark of Norfolk and was predeceased by siblings Schaefer, Dennis, Shirley Jean (Wilson), Theodore, Jr., and Sylvia (Leach). Morris attended elementary and junior high schools in Norfolk’s Campostella neighborhood and was a proud member of the 1956 graduating class at Booker T. Washington High School. He then served in the United States Air Force for four years. Afterwards, Morris began working for the United States Postal Service at post offices throughout Norfolk, in a career as a postal clerk that spanned four decades. As was his entire family, he was also a longstanding member of St. Thomas AMEZ church in Norfolk. Morris was a passionate golfer and ardent sports fan who loved watching baseball and football. Though they weren’t quite “childhood sweethearts,” Morris and Millicent Lowery were childhood neighbors and friends when they were growing up in Campostella, and they began their courtship in the 1950s. Their 60-year marriage produced three children: Dr. Keith Clark of Fairfax; and Kelly Clark Brown and Jennifer Clark Rodgers (Dr. Daryle Rodgers), both of Chesapeake. In addition to his beloved spouse and children, he leaves behind nephew Morris Clark, his namesake who was like a son in his faithful and unwavering dedication to his uncle. In addition, Morris was a doting and tenderhearted grandfather of six grandchildren: Brittany Brown, Taylor Brown, Lauren Brown, Kristen Brown, Jeremiah Rodgers, Jamison Rodgers, Imani Rodgers, and Isaiah Rodgers; and seven great grandchildren: Zyon, Naizer, Hassan, Uryiah, Na’Omiy, Zavier, and Kalem. Finally, Morris is survived by a host of nieces, nephews, and cousins whom he cherished.

Morris Clark, 83, peacefully transitioned on November 21, 2021, in Chesapeake, Virginia. He was born in January 1938 to the late Theodore and Geneva Clark of Norfolk and was predeceased by siblings Schaefer, Dennis, Shirley Jean (Wilson), Theodore,... View Obituary & Service Information

The family of Morris Clark created this Life Tributes page to make it easy to share your memories.

Send flowers to the Clark family.