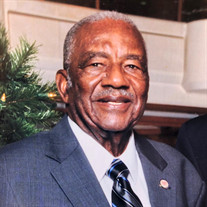 Born on January 18, 1926, to the late James Emit and Annie Maude Parker Chapman, James Brinkley Chapman was a lifetime resident of Smithfield, Virginia in Isle of Wight County. After graduating from Isle of Wight Training School, James Chapman joined the United States Navy, selected by the Great lakes Naval Training Center and proudly served his country during WW II in the Pacific for two years including bases in San Diego, CA, Hawaii, Japan and Southeast Asia. James was a founding organizer of the V.F.W. Post 8545. James Chapman was preceded in death by his father, “Emit”, his mother “Emma”; his five sisters; Gladys Marilyn, Pauline Ruth, Telia Maud, Bruce Carolyn, Rosemary “May Rose”, as well as his nephew, Brock Lawrence Jr. He leaves to cherish his love and memory, his nephews, Kevin Powell and Dr. Ranya Alexander and his family. Mayor Chapman never had any biological children, but he has several Godchildren: John Yeoman, Norma Hairston, Selden Haverty, Troy Seaborne, Stacey Blount, James Davis, III, Benzie Seaborne and Michelle Seaborne. Mayor Chapman was like a fifth child to Jeremiah and Ira Cuffey. As the only boy, with five sisters, he was delighted with his extended “family” because not only did he gain two more sisters, Delvin and Jerrene, but he also finally had two brothers, Sonnie and Jeremiah. A graduate of the New York City’s School of Mortuary Science, Chapman returned home and began working with Pretlow Funeral Home in Smithfield at an early age. In 1965, he bought the funeral home and in honor of its beginnings, renamed the establishment Pretlow and Chapman Funeral Home. Chapman retired from the business in 2017, but he couldn’t let it go completely! Once again, the business was renamed and is presently known as Chapman-J.T. Fisher Funeral Services. In 1978, Chapman was elected to the Smithfield Town Council. At that time, it was a rule that the elected member with the most votes would be appointed mayor. Chapman received the most votes but instead of appointing him outright, the rule was abruptly changed giving the members of the council the duty of appointing the mayor. Despite setbacks, James continued to serve and in 1990, twelve years later, The Honorable James B. Chapman became the first Black mayor of the Town of Smithfield and remained in office to become the longest serving mayor (19 years) of the Town of Smithfield! After 30 years of service to the Town of Smithfield and its constituents, Chapman retired in 2008. Among Mr. Chapman’s most rewarding accomplishments is the annexation of the Rising Star community off Battery Park Road in the 1980s. At the time, the council had voted to extend water and sewer services to the emerging Gatling Pointe community while by passing, and therefore denying, those services to Rising Star. He opposed this maneuver. Mr. Chapman also successfully lobbied to obtain Community Development Block Grants to pave streets and provide sewer and water services for Jersey Park Village, Riverview, and Lakeside Heights. Mayor Chapman started both the Pinewood Heights and the Church Street Projects. He was part of the Windsor Castle Park Development. Construction of the Smithfield Center was also completed during his tenure. Town Council meetings are held at the Smithfield Center where the meeting room is named "The James B. Chapman Chambers" in his honor. Mayor Chapman was not in office when former Smithfield Chief of Police, Mark Marshall, was scheduled to be pinned as International Police Chief during a ceremony in Orlando, FL, but Chapman was the citizen that Chief Marshall invited to pin him. Thanks to James Chapman's selflessness, many area children attended and completed college. Until recently when his health began to fail, Mayor Chapman remained active in the Smithfield and Isle of Wight communities. He was an active member of Main Street Baptist Church, having served 5 years as president of the Usher Board; served on the Board of Directors for Covenant Place Apartments (Smithfield); a Life Member of the NAACP; served as President of Virginia State Elks (19 years); he was a member of the Smithfield Elks Lodge #65, served as President of Dochiki Civic & Social Club, Newport News (2 years); served as Past President and life member of the Virginia Morticians' Association, Incorporated; served as Past President, member and former Treasurer of the Peninsula Funeral Directors' Association and was a member of the Isle of Wight Planning Commission from 1972-1978. James loved to socialize, eat, help others and he loved to travel. There were not too many states left for him to visit! He especially enjoyed visiting his nephew and his family in CA. There are too many friends, neighbors and family members who looked out for James Chapman in his later years to name them all, but a few include Gopher and Sabrina Batten, Sherrie McDowell, Valerie Butler, and Larry and Joahn Brown. James touched most of the residents of the Smithfield area in some capacity either as the Mayor, church member, mortician, friend or family! Surviving members of the family, wish to thank you all for making Isle of Wight County and Smithfield in particular such a beloved home for the Chapman family.

The family of Mayor James Brinkley Chapman created this Life Tributes page to make it easy to share your memories.

Send flowers to the Chapman family.