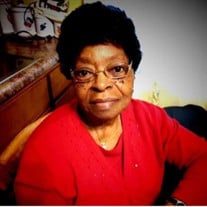 Even though we are broken and saddened with grief, we bow in humble submission to the will of our father; and so, it was that the Almighty saw fit to quietly take our beloved home on Monday, February 22, 2021 at Maryview Medical Center in Portsmouth, Virginia. Margaret Wright Ford was born to the late Jessie Wright and Nettie Pearl Bellamy Wright on Friday, December 7, 1934 in Robeson County, North Carolina. She graduated from Bladen County Training School, Elizabethtown, North Carolina in May of 1952. In 1953 while working as a waitress in a Lumberton, North Carolina diner, Margaret met a man from Columbus County, North Carolina by the name of Curtis B. Ford, Sr. Margaret had dreams of becoming a beautician and relocating to Virginia to pursue her career. That is exactly what happened. Margaret and Curtis married on February 20, 1955 at the Dillon County Courthouse in Dillon, South Carolina. They relocated to Norfolk, Virginia shortly thereafter. Margaret became a licensed beautician and quickly became a premier stylist in the Campostella area of Norfolk in which her and Curtis lived. While living at 1630 Brown Avenue, Norfolk, Margaret stumbled upon a sign about a church coming to the area. The name of the church was the Garden of Prayer Temple, 710 Park Avenue. Bishop L. E. Willis, Sr. was the pastor. Margaret and Curtis joined the church and became continually active members within the ministry. Margaret became involved with the hospitality committee and began to prepare meals for the pastor and different functions within the church structure. She became well-known for her homemade rolls and homemade cakes. Margaret and Curtis were blessed with a home and relocated to Portsmouth, Virginia in October of 1964. Margaret and Curtis had tried for several years to have children. Margaret had suffered several miscarriages over the years. In 1970, she gave birth to a baby girl. The baby only lived for five minutes. She was named Veronica Lynn Ford. Even after the loss of her baby girl, Margaret kept the faith that one day she would have a successful pregnancy. In 1972, Margaret’s prayers were answered. She received the news that she was pregnant. In January of 1973, Margaret was admitted to Portsmouth General Hospital in preparation for her baby’s birth. While she was in the hospital, Bishop L.E. Willis, Sr. visited and prayed that the birth would be a success. On Thursday, February 15, 1973 at 12:35PM, Margaret gave birth to a healthy baby boy, Curtis B. Ford, Jr. After the death of Curtis B. Ford, Sr. in June of 2003, Margaret Wright Ford continued to be faithful to the Garden of Prayer until the onset of her illness. Margaret was predeceased by her husband Curtis B. Ford, Sr., and her oldest sister Eva Mae Haywood. She leaves to cherish her memory a son: Curtis B. Ford, Jr. (Diantha) of Portsmouth, Virginia, two special children; Brian L. Boone, Sr. (Sandra) of Duluth, Georgia, and Laquiste E. Ransome of Marietta, Georgia; three sisters: Lou Bertha McCall of Elmont, New York, Cora Jane Thompson (Russell) of Philadelphia, Pennsylvania, Estella Alford of Lumberton, North Carolina, and a special friend Susie A. Arrington of Riverside, New Jersey; 15 grandchildren, and a host of nieces, nephews, and cousins.

Even though we are broken and saddened with grief, we bow in humble submission to the will of our father; and so, it was that the Almighty saw fit to quietly take our beloved home on Monday, February 22, 2021 at Maryview Medical Center in Portsmouth,... View Obituary & Service Information

The family of Margaret Wright Ford created this Life Tributes page to make it easy to share your memories.

Even though we are broken and saddened with grief, we bow in...

Send flowers to the Ford family.