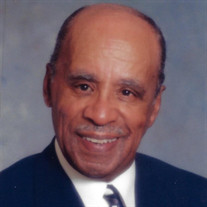 The journey of life for Warren S. Harris came to an end when God called him from labor to rest on August 21, 2021. Born in Brooklyn, New York, Warren was the younger of two sons born to the union of the late Cute and Beatrice Harris and predeceased by his brother Ellis E. Harris in October 2002. Because of the loss of his parents at an early age, he was reared by his aunt, the late Clementine McGlone whom he affectionately called “Mom.” Warren was educated in the public school system of Brooklyn, New York and high school in Roanoke Rapids, North Carolina. He earned a BS Degree in mathematics from North Carolina A&T State University, Greensboro North Carolina and a Masters Degree in Guidance and Counseling, Marshall University, Huntington, West Virginia. After a short teaching career in Accomack County, Virginia, Warren entered military service as a Second Lieutenant and proudly served his country for over 20 years, and achieved the rank of Lieutenant Colonel. He concluded his military service at Ft Monroe, February 1974. His decorations include Legion of Merit, Meritorious Service Medal, Vietnam Ser-vice Medal, Korean Service Medal, Expert Infantryman’s Badge, and the Parachutist Badge. In October 1974, Warren began a second career with the Federal Government and re-turned to Ft Monroe as a Military Operations Specialist. After serving in various capaci-ties for over 22 additional years, Warren retired from the work force in February 1994 as a GS-14 supervisor. His Civil Service awards included the Meritorious Civil Service Award and the Commanders Award for Civilian Service. Throughout his lifetime, Warren was very actively involved with numerous organizations and activities. He served on special boards and commissions for the city. He was a member of the Zeta Iota Chapter, Omega Psi Phi Fraternity, Inc. where he served as Ba-sileus and Keeper of Records and Seals. Warren was also a member of the Eureka Club, serving in many capacities to include President for three separate terms. His major con-tribution was serving as the chairman of the prestigious Eureka Debutante Cotillion for over 22 years where he worked to present hundreds of young ladies to society. He was a former member of Third Baptist Church. Among his many important positions he served as Chairman and member of the Trustee Board and Sunday School Teacher, Class 12. He later became a devoted member of Grove Church, where his spiritual growth was significantly enhanced by Pastor Melvin O. Marriner. He was actively involved in several church activities to include Professional Care and Seniors Ministries. As a hobby, he served as coach for the Rinky Dinks bowling group. He was a staunch supporter of the mission and vision of the church. He was predeceased by his loving and devoted wife of 65 years, Dora M. Harris, and leaves to cherish his memory two sons, Warren D. Harris (Gina) Chesapeake VA and Derryl C. Harris (Patricia) Reston, VA; adopted son David Anderson (Rosaland) San Anto-nio, TX; three grandchildren, Lindsay, Warren D. II, and Derryl C. II; and a host of other relatives and friends, including his special social group. “I have fought a good fight, I have finished my course, I have kept the faith. Henceforth there is a crown laid up for me a crown of righteousness, which the Lord, the righteous judge, shall give me at that day: and not to me only, but unto all them also that love His appearing.” 2 Timothy 4:7-8 KJV

The journey of life for Warren S. Harris came to an end when God called him from labor to rest on August 21, 2021. Born in Brooklyn, New York, Warren was the younger of two sons born to the union of the late Cute and Beatrice Harris and predeceased... View Obituary & Service Information

The family of Lieutenant Colonel Warren Harris created this Life Tributes page to make it easy to share your memories.

The journey of life for Warren S. Harris came to an end when...

Send flowers to the Harris family.