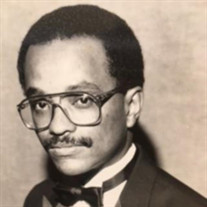 Larry Barnell Pleasant entered eternal life on December 12, 2021 after a lengthy illness. Larry was a courageous fighter and did not succumb to his illness easily. Many often called him the “energizer bunny”and that he had nine lives. He was born December 22, 1953 in Newport News Virginia to the late James W and Bernice B. Pleasant and was raised in Smithfield, Virginia Larry as a child, was an active member of Hill Street Baptist church, now known as Main Street Baptist Church. Larry was a 1972 honor graduate of Smithfield High School. He was selected into Who’s Who among American High School students which is based on students’ academic achievement and involvement in extracurricular activities In addition he was inducted into the National Honor Society He was a two sport athlete playing football and basketball, and a member of the high school marching band. After high school, he went on to attend Hampton Institute now Hampton University in Hampton, Va. While attending Hampton Institute he was initiated into Gamma Iota Chapter of Alpha Phi Alpha Fraternity, Incorporated in 1974. Larry received his Master Degree in Human Resources from Pace University, in New York, NY. Larry had a big personality. At home he was always singing and dancing SInging was his passion. God blessed him with a beautiful tenor voice. The family particularly loved his rendition of “Jesus Loves Me” While in college, he was a member of the Hampton Institute choir and later in life was a member of the prestigious North Jersey Philharmonic Glee Club of Newark, New Jersey. In 1985, his choir performed at the White House. While living in New Jersey he was a member of Berean Baptist Church and was installed as a Deacon. Larry retired from St Vincent Foster Care, Inc in Brooklyn, NY and returned to his beloved hometown of Smithfield, Virginia He continued his membership with Main Street Baptist Church where he was a deacon and a member of the Adult Choir and Men of Music. Larry was also preceded in death by his brothers, James Burnell Pleasants and Williams D. Pleasants. He is survived by a sister, Jeanette B Grandison, two brothers Warner Bailey and Nolie Bailey(Gwen). An aunt Margaret P. Rowlett of Baltimore, MD; special cousins, Lorraine Pleasants Hemphill of Philadelphia, Pa and Charmaine V. Keeton, Centennial, CO. A special friend David Pitt and close friends Miles and Shirell Blount Larry was very fond of his nieces and nephews. They called him their big brother. Christopher Grandison,Sr., Jeanna G. Addison,(Shurly) Vicki Milan, (Angelo), Michael Bailey, Deidre Brown,(Reginald Brown) Bonita Pelzer, Michael Pleasants, Angela Pleasants, and Delana Pleasants. Grand nieces and nephews Christopher Jr.Corey, Tiffany, Morgan,and Mekayla, and a host of great-grand nieces, nephews and cousins.

Larry Barnell Pleasant entered eternal life on December 12, 2021 after a lengthy illness. Larry was a courageous fighter and did not succumb to his illness easily. Many often called him the &#8220;energizer bunny&#8221;and that he had nine... View Obituary & Service Information

The family of Larry Barnell Pleasant created this Life Tributes page to make it easy to share your memories.

Send flowers to the Pleasant family.