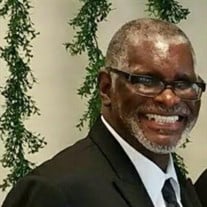 On Monday, February 8, 2021, surrounded by his loving family, Larry Anthony Anderson entered into the joy of the Lord. Larry was born on June 9, 1952 to Ruth Jane Laird and John Anderson in Gulfport, Mississippi. Larry obtained his secondary education in the Gulfport School System. He attended Perkinson Junior College in Perkinson, MS where he was a member of the Black Culture Society. He graduated from Southern University in Hattiesburg, MS in 1976, where he was a member of Phi Beta Sigma Fraternity Incorporated. He obtained his Bachelor of Science degree in Physical Therapy. Larry enlisted in the US Navy in 1978 and served 20 years. He received many awards and accommodations. He retired from the Navy in 2000. Upon his retirement, he was employed as a truck driver for National Linen Company and as an Armored Service Technician for Loomis. Larry married the love of his life, Lassie who he affectionately called Lizzie and Lovely, on August 27th, 1983. They enjoyed 38 years of wedded bliss together. Larry attended Centennial Baptist Church for many years. Larry enjoyed collecting and listening to his records, reading, and watching sports, especially when his favorite team, the Dallas Cowboys played. He loved to talk about the game and give you all the facts about his favorite players. You could always catch him sporting his baseball caps. He enjoyed talking about the news of the day and spending quality time with his friends and family. In his latter years, he enjoyed listening to Gospel music and reading scripture with his wife and loved ones. Larry is preceded in death by his parents, the late Ruth Laird and John Anderson. His life and legacy lives on through his wife, Lassie Louise Yvonne Anderson, their children, Philette, Deana, and Phillip, and his siblings Joyce Legier (David), Bettie Parker, John Anderson, Jr. (Jeanne), Thelma Dockett, Gerald Anderson, Marcus Anderson (Gabrielle), Roy Anderson, Derrick Anderson, and Kenyatta Anderson. He is also survived by his 3 sisters-in-law and 3 brothers-in-law. He was lovingly known as “Papa,” by his many grandchildren, Godchildren, nieces, nephews, and cousins. He will be remembered in love by his long-time childhood friends, college buddies, and US Navy comrades whom he held in highest regards until his passing. His favorite scripture was Psalm 23:1-2,6. The Lord is my Shepherd, I shall not want. He maketh me to lie down in green pastures: he leadeth me beside the still waters. Surely goodness and mercy shall follow me all the days of my life and I will dwell in the house of the Lord forever.

On Monday, February 8, 2021, surrounded by his loving family, Larry Anthony Anderson entered into the joy of the Lord. Larry was born on June 9, 1952 to Ruth Jane Laird and John Anderson in Gulfport, Mississippi. Larry obtained his secondary... View Obituary & Service Information

The family of Larry A. Anderson created this Life Tributes page to make it easy to share your memories.

Send flowers to the Anderson family.