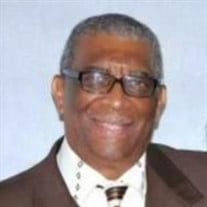 Junius Wilson Hopson, Jr., also affectionately known as Dad, “Bubba”, Pucka, Footz, Uncle El, and Elder Hopson, was born on January 23, 1944 in Portsmouth, VA to the late Junius W. Hopson, Sr. and Sallie C. Hopson. Junius Hopson was a proud product of the Portsmouth School System. He then proudly served our great country for four years in the United States Air Force. After his service time, he began a tenured career at the Norfolk Naval Shipyard. His first role there was a rigger; he then moved into Police Security. During his time at the shipyard, he completed his Associates Degree in Drafting and Design Technology at Tidewater Community College. He was later promoted to a Nuclear Engineering Technician and performed in that capacity until his retirement with 30 years of service. Although he officially retired from the workforce, he took on a role, which was a labor of love, where he helped manage operations at Trinity Faith Diamond. He enjoyed using his skills and crafts to keep the church running with exceptional quality. Junius Hopson has been a pillar of his church. His melodious voice was often heard in the choir; he was a Deacon and was ordained as an Elder. He was a man of faith and a true believer of Jesus Christ. When faced with times of adversity or when under attack, he would always say, “I am like David. I slew the lion, bear and Goliath”. Whether he knew you well or even when you just met, he always gave a warm smile and an encouraging word and a joke or two to make you smile. He never complained and he would give you the truth. He is survived by his loving and devoted wife of 53 years Cynthia K. Hopson; three daughters, Sonya Yvette Hopson, Bowie, MD, Monica Hopson Goode (Kerry), Jacksonville, FL, Cassandra “Sandy” Hopson Lee (Tolan), Chesapeake, VA; two grandsons, Michael Hopson, Tampa, FL and Andrew Hopson, Brunswick, GA; two granddaughters, Jordan Hopson, Bowie, MD and London Lee, Chesapeake, VA; a grand dog, Kaya Goode; one sister, Eloise Baker, Portsmouth, VA; one brother-in-law, Walter Smith, Portsmouth, VA and a host of nieces, nephews, cousins and friends. In addition to his parents, he was predeceased by his sister, Audrey Smith of Portsmouth, VA Junius made this world a better place and his legacy will live on. Because of who he was and all he did, he will be missed...but never forgotten. "Out of abundance of caution, the church will only be open to the immediate family. Please feel free to come to the church and stream from your vehicle, or safely off site by going to www.YouTube.com and enter Faithdiamond.live". In lieu of flowers, the family is asking that you consider making donations be made to one or more the following organizations: 1. Norfolk State University - DNIMAS Endowment Fund (https://alumnirelations.nsu.edu/donation-search?fid=M6r6Otwza70%3d&fdesc=yg7oOwgp4BtN%2biD6yyJgCljDRA%2fOKVEg ) 2. Norfolk State University - School of Business (https://alumnirelations.nsu.edu/donation-school-of-business) 3. The American Cancer Society (cancer.org)

The family of Junius W. Hopson Jr. created this Life Tributes page to make it easy to share your memories.