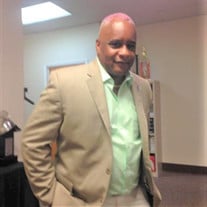 Julius DeBerry, a brother, father, grandfather, and great-grandfather peacefully slept away to be with the Lord on Tuesday, February 16, 2021. He was born on April 22, 1961 in Portsmouth, VA. He attended Woodrow Wilson High School &#8211;... View Obituary & Service Information

The family of Julius DeBerry created this Life Tributes page to make it easy to share your memories.

Send flowers to the DeBerry family.