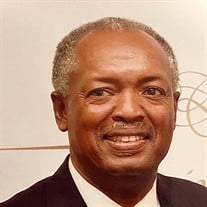 A Time to be Born: Joseph was born on Thursday, June 8, 1950 in Norfolk County, now known as Chesapeake, Virginia. He is the oldest son, but the third child born to the late Reverend Joseph L.A. Harris, Jr. and Pauline Cuffee-Harris. He was affectionately called "Tatoe" by relatives and "Joe" to his friends. A Time to Learn and Work: Joseph attended the Chesapeake Public Schools. He graduated from Crestwood High School "Home of the Bombers", class of 1968. He was a member of the Spanish, Drafting, Student Council and Newspaper Clubs. His ambition was to be an Architect. He attended Norfolk State College, now known as Norfolk State University where he majored in Physics. Joseph was employed by Ford Motor Company for 40 years until he retired and the company relocated. A Time to Love: On August 20, 1983 Joseph Lee Harris, III and Ada Angela Ricks were united in Holy Matrimony. From this union three children were born. This is my commandment, That ye love one another, as I have loved you. John 15:12 Children, obey your parents in the Lord: for this is right. Ephesian 6:1 A Time for Church and Worship: Joseph was converted and joined Bethel Church, now Greater Bethel African Episcopal Church in his youth under Reverend F.M. Hicks. He accepted Jesus the Christ as his Lord and Savior, confessed with his mouth and believed in his heart that Jesus is the Son of God. Joseph served and held several positions. He was a member of the Men's Choir, #2 Adult Choir and Concert Choir. He would often sing "Brightly Beams", a favorite of many, with his soft Tenor voice. He was Man of the Year, Father of the Year 1990, Pro Tem of the Steward Board, Financial Committee, Bible Study Teacher, Sunday School Teacher and the Christian ED Director. Study to shew thyself approved unto God, a workman that needeth not to be ashamed, rightly dividing the word of truth. 2 Timothy 2:15 Time to Serve: Joseph's service went beyond Greater Bethel, and his God given gifts were used at several churches and denominations. He was the Sunday School (Highlights) evening teacher on fifth Sundays at Providence AMEZ Church in Portsmouth, VA, Bible Study teacher for the Inspirational Choir and Vacation Bible Camp at Little Zion Baptist Church, Chesapeake, VA. Joseph served his fellowman; he would provide transportation to and from for people in need, prayed many prayers for those who requested and stood in the gap, prayed over the church grounds and empty pews even when there wasn't Church service. As we all know, Joseph had a passion for automobiles, especially antiques and had great auto mechanic skills. He used his knowledge and skills to be a blessing to his family and the community. 1 Peter 4:10-11 As every man hath received the gift, even so minister the same one to another, as good stewards of the manifold grace of God. If any man speak, let him speak as the oracles of God; if any man minister, let him do it as of the ability which God giveth: that God in all things may be glorified through Jesus Christ, to whom be praise and dominion for ever and ever. Amen. Time to Rest: On Wednesday, April 27, 2022, Joseph Lee Harris, III transitioned from earth to Glory surrounded by his beloved family.

A Time to be Born: Joseph was born on Thursday, June 8, 1950 in Norfolk County, now known as Chesapeake, Virginia. He is the oldest son, but the third child born to the late Reverend Joseph L.A. Harris, Jr. and Pauline Cuffee-Harris. He was... View Obituary & Service Information

The family of Joseph Lee Harris, III created this Life Tributes page to make it easy to share your memories.