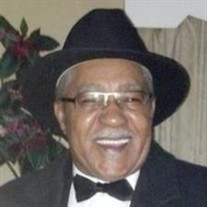 John R. “Bobby” Ward, Sr., earned his eternal resting home on Tuesday, December 7, 2021. Born on May 14, 1930 in Norfolk, Virginia to the late Will Robert and Mable G. Ward-Payne, John was the second of eight children. He is preceded in death by his parents; two sisters: Jean Rhodes and Otelia Seeger and two brothers: Rudolph Ward and James Payne. John received his formal education from the Portsmouth City Public School System and also attended photography school in New Jersey. In his early adulthood, John served in the United States Army as well as the United States Merchant Marines. Upon being honorably discharged, John sought employment with the Norfolk Naval Shipyard, where he retired in 1987 as a Production Controller after 37 years of service. As a Godly man, John always strived to keep his Christian principles at the forefront of his life. In 1979, John found his forever church home at the Basilica of Saint Mary of the Immaculate Conception. There, he served diligently on various ministries, including the Usher Board, Gatekeepers and as the Church Historian. John’s love for his church fueled him to remain faithful to his calling. John not only loved his church, but he also loved and adored his wife of 71 years, the former Lethia Elaine Sexton (Ward). He demonstrated an insurmountable love toward Lethia just as the Bible instructs: “Husbands, love your wives, just as Christ loved the church and gave himself up for her.” (Ephesians 5:25). Their union was the perpetual example of endearment, passion and adoration. For 91 years, God ordered John’s steps and gave him the strength, wisdom and fortitude to raise and provide for his wife and family. His steadfastness as a family man with many talents was featured in a 1974 Virginian Pilot news article titled “The Bakers Dozen”. John used his talents to expose his children to diverse experiences. He loved to dance and listen to swing/jazz music. As a young adult, he played the bongos and the drums. He also enjoyed staying physically active by playing baseball, fishing, golfing and bowling. He, along with his cousins and other African-American bowlers were instrumental in helping to integrate the Victory Lanes Bowling Alley during the civil rights era in Portsmouth, VA. He was an avid follower of current events and was extremely passionate about local and national politics. In modern day terms, John would be known as a Renaissance Man and a Jack-Of-All-Trades. With no formal training in carpentry or electronics, John was able to design and convert a two-bedroom house into a four-bedroom home for his family. He was also known as the neighborhood Mr. Fix-It; repairing televisions, vacuum cleaners, radios and anything with a chord. Left to cherish his memory and carry on his legacy are: his wife of 71 years, Lethia Elaine Ward; two sisters: Genieve Kennedy (Grasonville, MD) and Shirley Harding (Portsmouth, VA); nine sons: Tony Bazemore (Margaret), Portsmouth, VA; John R. Ward, Jr. (Odessa), San Antonio TX; Linwood J. Ward (Pat), Hampton, VA; Daryll M. Ward (Jeanette), Fayetteville, GA; Danattis Ward (Theresa), Jonesboro GA; Vincent F. Ward (Tracy), Chesapeake, VA; Michael A. Ward (Debbie), Sumter, SC; Francis T. Ward (Kimberly), Chesapeake, VA; and Armondo Ward, Portsmouth, VA; three daughters: Valerie McDowell, Edgewood, MD; Sharon Blizzard (Stanley), Portsmouth, VA and Janice Elliott (Wilbert), Suffolk, VA; 30 grandchildren; 41 great-grandchildren; three great-great- grandchildren; very special sisters-in-law: Angela Mullen (Portsmouth, VA) and Tina Sexton (New York, NY) and his only God-daughter, Blessing Washington (Norfolk, VA). John R. Ward, Sr. was many things to many people, but the one thing that he was to everyone…was loved!

The family of John R. Ward, Sr. created this Life Tributes page to make it easy to share your memories.