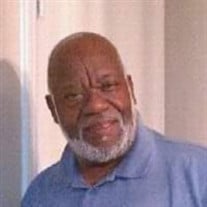 John R. Brooks was born January 13, 1937, in Madisonville, Texas; the 3rd of 9 children born to Lovey and Laura Nugent Brooks. John began his education at Pools Creek School in Madisonville and later attend schools in Galveston and LaMarque, TX, graduating Salutatorian from Lincoln High School class of 1955. He loved school and almost every year won perfect attendance awards along with academic awards and recognitions. John enjoyed poetry and was great at reciting poems. One of his favorite poems to recite was "The House by the Side of the Road" by Sam Walter Foss. Though he was quiet by night and was quiet by nature, he made lasting impressions on all who knew him. John joined the US navy in 1955 and served 20 years before retiring. He loved to sing, dance, bowl, and travel with his family. He was also one of the founding members of Greater Macedonia Baptist church in LaMarque, TX where he was baptized. John was preceded in death by his loving wife Jeanie Lanelle Brooks, his parents, 2 sisters, Annie Pearl Francis, and Ollie Sue Davis as well as 3 brothers Eddie Brooks, Lige Brooks and Robert Brooks. Left to continue his legacy are his children Edward Gregory Walker and Jennifer Brooks Williams, grandchildren (Shawnyece , Shawntay, Tenasia, John Christian, MeKhia and Marques), and great grandchildren (Airanece, Aniyah, twins Elijah and Grayson, Elijah and Jayce ), his sisters Annie Laura Brooks and Velma Ruth Coleman both of Lamarque Texas and his brother Cecil Brooks (Eloise) of San Diego California, sister in-laws Vivian Walker, Mary Brooks along with many adoring nieces, nephews, cousins, classmates of Lincoln High Class of 1955 and friends.

The family of John R. Brooks created this Life Tributes page to make it easy to share your memories.

Send flowers to the Brooks family.