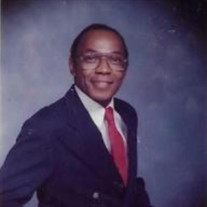 Ecclesiastes 3:2 teaches us that there is a time to be born and time to die. In God’s ordered plan, John Lawson Delk, 91, was born on December 17, 1928, the 11th child to the union of Decatur Dawson Delk and Virginia “Jennie” Johnson Delk. After a blessed life of service, John answered his Master’s call to come home on Wednesday, April 15, 2020—at the close of the day in his sovereign peninsula cottage in the Historic Riverview community of Smithfield, Va. “The Mayor of Riverview” or “Buggy,” as he was affectionately called by those who knew him well, served his community with great pride. In his “griot” role, he was the preservationist and archivist of the oral traditions and history, telling the stories of families and life as it unfolded through the years in “Riverview” and town. Having been reared in a supportive and well-grounded home, religion, education, work and civic responsibility were requisite components of his everyday life. A student of the segregated public educational system, he graduated from Isle of Wight Training School, the Class of 1948. He would later enter the United States military and serve as a field nurse/medic in the Army during the Korean War for two years. After an honorable discharge, he would go on to live in East Orange, New Jersey, and work for more than 20 years at the East Orange Veteran’s Administration Medical Center as an orderly. Upon returning to Smithfield to care for his mother, he continued employment responsibilities and duties in the clinic at Newport News Shipbuilding. John would later retire from Isle of Wight County Schools’ Smithfield High School as a custodian, having cultivated many lifelong and rewarding relationships with administration, faculty, staff, students and co-workers. In retirement he worked part-time at the Smithfield Times in preparing the newspaper for distribution. Brother Delk was a devoted member of the Main Street Baptist Church, where he entered to worship and serve God’s people through his ministerial gift of hospitality and help on the Joint Usher Board. His one last desire, which he ultimately did not get to do, was to attend Sunday service physically one more time. Well, we think God let him know in His own mysterious way that there was a more solemn appointment that was to be kept with Him scheduled for April 15. He was preceded in death by his aforementioned parents, and subsequently his ten siblings—five sisters and five brothers: namely, Mary Rose Holoman, Julia Lock, Dorothy Wilkerson, Frances Delk, Gertrude “Tex” Boothe, Decatur Delk, Robert Delk, James Delk, Richard Delk and George Delk. John is survived by a loving and extended web of nieces, nephews, cousins, in-laws, other relatives and friends. Countless family members and community friends gravitated toward and consulted with “Uncle Buggy,” “Buggy,” “Mr. Delk” or “John Lawson” for assistance regarding lawn and gardening, cooking, family connections, historical events, or just sage advice on almost any topic from this “old man who has been around a long time.” He took great pride in filling orders for his famous “tipsy-cake” or homemade ice cream during the holidays or any special occasion. His picturesque yard and well-maintained natural surroundings reflected the hard work and time he expended in keeping his iconic cottage reserve beautiful. To this day, John’s peaceful retreat—overlooking the scenic wildlife-filled marshes bordering the Pagan River—is a wonder to be observed by many native and tourist passers-by. A people-person indeed, he was the generational linkage of family that connected all of the extended family; he knew where everyone was and had contact to most everyone by whatever means available. In later years, neighbors and family anticipated watching Smithfield’s Fourth of July fireworks display from his humble abode perched on the bluff of the Pagan on a midsummer night. Undoubtedly, Buggy’s ice cream and cake, reminiscent of olden days of family gatherings on the hill, would be the real attraction of the get-togethers. Buggy was Buggy, and there probably was no one like him. You might not have “liked” everything Uncle Buggy said or did; but one thing for sure is “you just had to love him.” He was and always will remain family. ACTS OF COMMEMORATION FOR JOHN LAWSON DELK **Intermittent Visitation and Viewing: Monday, April 20, 2020 4:00 – 6:30 Visitation Hours Main Street Baptist Church 517 Main Street Smithfield, Va. followed by **Military Honors and Meditation by Pastor James M. Harrison *6:30 – 7:00 Private Service (To be streamed) **Private Interment: Tuesday, April 21, 2020, 10 a.m. Albert G. Horton Jr. Memorial Veterans Cemetery Suffolk, Va. *To be streamed ** Limited capacity because of COVID-19 restrictions In lieu of flowers, please make donations to Main Street Baptist Church.

The family of John "Buggy"Lawson Delk created this Life Tributes page to make it easy to share your memories.

Ecclesiastes 3:2 teaches us that there is a time to be born and...

Send flowers to the Delk family.