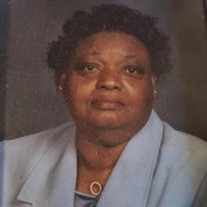 Joan Arnette Rainey, of Chesapeake, VA departed this life on April 15, 2022, at the tender age of 72. She was born on December 4, 1949, to the late John and Elizabeth Drew Rainey in Portsmouth, VA and was raised by a very devoted aunt the late Gloria H. Goode. She attended Portsmouth Public Schools graduating from I. C. Norcom High School in 1968. Joan decided to move to Lawrenceville, VA shortly afterwards wanting to get to know the Rainey side of her family. She became a domestic worker for several families before gaining employment at Central State Hospital in Petersburg, VA as a Mental Health Technician. After 30 years and 6 months of service, she retired on December 2, 2002, with the intentions of moving back to Portsmouth. Joan however changed her mind by going back into the workforce at Southside Community Services Board as a Direct Support Professional at Rainbow House until her health declined. At an early age, Joan was a member of Mount Hermon Baptist Temple in Portsmouth, VA. Upon moving to Lawrenceville, she joined The Glorious Church of God in Christ under the leadership of her uncle the late Elder Peter J. Rainey. Joan moved her membership to First Baptist Church where she was a devoted member until her health declined. She was an active member of the Kitchen Ministry and the Gospel Chorus as the choir treasure. Joan had a passion for cooking, hand dancing, spending time with her family and friends, traveling, shopping, and telling jokes. She will be remembered for her potato salad, chitterlings, picking the best watermelon for any family function, and cheesecakes. Joan was an original kind of person, she showed love to everyone that crossed her path and if she had something to say she truly spoke her mind. Her favorite sayings were “I don’t care what you do, never let any grass grow under your feet” and “don’t cry over spoiled milk!” She was predeceased by her parents John and Elizabeth Rainey, Aunt Gloria H. Goode, brother Joseph Goode, and one sister Deborah Rainey. Joan leaves to treasure her memories: one sister Joyce (Loretta); one daughter Natasha Hardy; 5 sisters whom she was raised with: Jacquelyn Roberts (Larry); Angela Goode, Gloria Walker, Telaza Moore, Jereena White (Carlton); 3 brothers whom she was raised with: Lewis Jr., Lloyd (Thelma), Keith Goode; special and devoted friends Hattie Lambert, Nancy Studivant, Nancy Stewart; special daughters Kathleen Clements, Michelle Powell, Michelle Hardy, Kelly Bruce; and a host of nieces, nephews, cousins, and friends.

Joan Arnette Rainey, of Chesapeake, VA departed this life on April 15, 2022, at the tender age of 72. She was born on December 4, 1949, to the late John and Elizabeth Drew Rainey in Portsmouth, VA and was raised by a very devoted aunt the late... View Obituary & Service Information

The family of Joan A. Rainey created this Life Tributes page to make it easy to share your memories.

Joan Arnette Rainey, of Chesapeake, VA departed this life on...

Send flowers to the Rainey family.