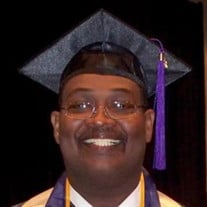 Jerry McKinley Outlaw, affectionately known as “Jer,” was born on December 20, 1964, in Portsmouth, Va., to the late James Outlaw and Irene Mitchell Outlaw. God in His infinite wisdom saw that Jerry was tired after being on dialysis for 21 years and called him home to eternal glory on Wednesday, January 19, 2022. Jerry was educated in the Portsmouth public school system and graduated in 1983 from Manor High School. After graduation, he relocated to the State of Maryland, where he was employed at the Maryland Department of Transportation in the Office of the Secretary and the Maryland Motor Vehicle Administration. In 2001, Jerry was diagnosed with renal kidney failure. Despite his medical challenges, his faith stayed anchored in the Lord, and his zest for life soared. Jerry was determined not to be limited by his medical condition. In 2009, he relocated back to Portsmouth, Va., and enrolled in the Criminal Justice program at the ITT Technical Institute. In 2011, he graduated with honors and soon began working at the Office of Probation and Parole. Jerry was a true jokester, charismatic, and friendly. He was a truly outgoing person who seemed never to meet a stranger he did not like. At an earlier age, he took an interest in music and taught himself to play guitar. Jerry often dazzled family and friends by playing musical selections he learned by ear, such as “Purple Rain” by Prince—one of his favorite artists. Witty and intelligent, Jerry was always up for a challenge and, whether debating social injustices or playing trivia games with his cousins, he was quick with a dictionary, or a thesaurus, or even Google, if an answer was in dispute, or his reputation as the “Master Scholar" of the group was under threat. In 2018, he met the love of his life Mellissa Poe of Hampton, Va. Jerry and Mellissa enjoyed a deeply loving and sweetly affectionate relationship. They traveled together, rode motorcycles, fished, enjoyed dinner/date nights, and attended car shows and concerts. On July 11, 2021, Jerry asked Mellissa to be his wife, and she gladly accepted. Jerry selected the widely celebrated holiday of “Sweetest Day," October 15, 2022, for their union—a day to share kind gestures, cards, and sweet messages with a loved one or a friend. Although he has departed this life, the memory of his sweet spirit, kindness, and warmth will forever live in the hearts of those he touched. Among those cherishing him in memory is his mother Irene Mitchell Outlaw of Portsmouth, Va., his sister Delphia Outlaw of Ellicott City, Md., his uncles Willie (Toni) Mitchell of Richland, NC, and Keal (Martha) Mitchell of Rich Square, NC., his aunts Mamie Perry (Thomas) of Raleigh, NC., Evelyn Rountree (Malachi) of West Orange, NJ., Linda Johnson (James) of Iselin, NJ., and Sarah Mitchell of Rich Square, NC. Also mourning this incredibly difficult loss is a host of aunts, uncles, cousins, childhood friends, neighbors, colleagues, and two very special friends whom he considered siblings Angela Taylor of Chesapeake, Va. and Ulysses “T.J. “Hill of Portsmouth, Va.

Jerry McKinley Outlaw, affectionately known as &#8220;Jer,&#8221; was born on December 20, 1964, in Portsmouth, Va., to the late James Outlaw and Irene Mitchell Outlaw. God in His infinite wisdom saw that Jerry was tired after being on dialysis... View Obituary & Service Information

The family of Jerry M. Outlaw created this Life Tributes page to make it easy to share your memories.

Send flowers to the Outlaw family.