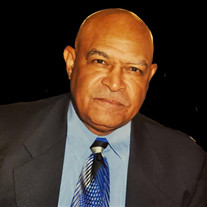 James Edward Whitehead, affectionately called Red, was a loving husband and father, a trailblazing tradesman and a man of faith. James was born to Mary Alice and James Dickens on April 20, 1943 in Nash County, North Carolina. He attended Rocky Mount City Schools and graduated from Booker T. Washington High School in Rocky Mount, North Carolina in 1961 where he excelled in football and basketball. After graduation he attended St Paul’s College in Lawrenceville, Virginia and Norfolk State University. Baptized at an early age, James was active in multiple churches over the years. In the 1960’s and 70’s he was a member of St. Paul’s Catholic Church, where he was a Scripture reader and a member of the Knights of Columbus. Most recently he and his wife, Doris were members of New Galilee Missionary Baptist Church, where he was a deacon and president of the men’s chorus. James completed an apprenticeship and became an expert brick mason - working for many years as a foreman at Sprinkle Masonry in Chesapeake, Virginia, and Snow Jr. & King in Norfolk, before starting his own construction company. James helped to integrate the Masonry Trade Union in Tidewater and served as a mentor to other minority tradesmen. There are hundreds of buildings in the Tidewater area that he helped to construct, and they provide a tangible reminder of his impact. James was always on the go. He, along with his wife, and sister and brother-in-law loved to travel, and were often off on excursions, cruises, and tropical vacations. If there was a family affair to attend, James was the first to plan to drive across town, or across the country to attend. He was known for his fish fries at all events. James was a true family man, always there when a relative was in need. From flat tires to broken fences, he was the “go to man” who could help get the job done. His children have numerous stories of his willingness to drive many miles to help out with car-related emergencies. James loved working with his hands and had a passion for restoring vintage Lincoln cars. He was the vice president of the Booker T. Washington Alumni Association, an organization in which he loved and worked tirelessly. James also had a passion for sports and loved watching old westerns. James was preceded in death by his mother, Mary Alice, his father, James Dickens, four siblings, Shirley Ann Merritt, Linda Marie McKinnon , Norman Whitaker and Walter Dickens, and a brother-in-law Ralph Burks. In addition to his loving and devoted wife, Doris Whitehead, he leaves to cherish his memory, an uncle, Dorsey Whitehead of Chapel Hill, twelve siblings, Jesse Whitaker, Katie Ruth Farmer, Brenda Faye Atkins, James Arrington and Mary Alice Foxx, all of North Carolina, Terrie Dickens, Carolyn Hanna, Gwendolyn Jackson, Janett Mason, Levern Dickens, Byron Dickens and Linwood Dickens, all of Virginia, and a sister-in-law Eleanora Burks, also of Virginia. He is also survived by his children James Whitehead, Gregory Whitehead, Martin Whitehead, Jaymes Whitehead-Urquhart and Marian Walker, grandchildren Christina Whitehurst, Charelle Whitehead, James Whitehead, Lauren Walker, Courtney Urquhart, Clark Walker, Cornell Urquhart Jr., Zoe Walker, Kyla Whitehead, Cooper Whitehead, Riley Whitehead, Jessie Whitehead and Dallas Whitehead, a special niece, Christana Jenkins, and a host of great-grandchildren, and other nieces and nephews.

James Edward Whitehead, affectionately called Red, was a loving husband and father, a trailblazing tradesman and a man of faith. James was born to Mary Alice and James Dickens on April 20, 1943 in Nash County, North Carolina. He attended Rocky... View Obituary & Service Information

The family of James Whitehead created this Life Tributes page to make it easy to share your memories.

Send flowers to the Whitehead family.