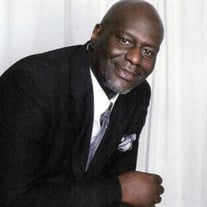 James Arthur Clifton, Jr. was born in Portsmouth, Virginia on June 2, 1958 to the late James Arthur Clifton, Sr. and the late Shirley V. Clifton. James, fondly known as “Junie” was the eldest of two sons. He and his brother were raised in Cavalier Manor by their mom, after their father passed, when he was just 5 years old. James was educated in Portsmouth Public Schools, graduating from Manor High School, Class of 1976. He entered the United States Army and served for several years until he was honorably discharged. He attended Norfolk State University and received an Electrical Apprentice Certification from Everest College. He worked as a bricklayer for Jason Masonry for many years. After several other occupations, he thrived in the Insurance Industry and was last employed with Sutherland Global Service as an agent for Aflac. His outgoing and spirited personality brought joy to those he worked around, always encouraging and sharing the word of God. James was reared in Christian Antioch Church under the leadership of the late Bishop Samuel Williams, where he received Christ as his personal Savior. His mother was the epitome of a godly woman and at an early age, she ensured that both he and his brother’s foundation were set in Christ. Throughout the years he was affiliated with several churches. In his later years, Community Church Western Branch, under the leadership of Pastor Michael Brueseke, gave him that multi-cultural experience, while Bethel Baptist Church Norfolk, under the leadership of his longtime friend, Pastor Joseph G. Casper, Jr., and Jesus Church of Deliverance, under the leadership of his god-brother, Bishop Lagus McCoy, gave him that deep rooted, soul-stirring, move of God experience. The scripture says, “He that findeth a wife findeth a good thing and obtaineth the FAVOR of God. The Lord allowed him to find her in Memphis, Tennessee and on July 20, 2012 he was joined in marriage to Evangelist Donna Ware Clifton. He also became her Joseph and took her then 5 year old son Zion as his own, legally changing his last name to Clifton. They became the family that God saw fit to put together for His use and glory. He will be missed by his wife of 8 1/2 years, Evangelist Donna Clifton. He leaves three sons, Zion Clifton, James A. (Taletta) Clifton, III and Christopher (Asha Rene) Clifton, one daughter, Latoia Wilson, eleven grandchildren, one great grandchild and one on the way. He was a son to his mother and father-in-law, Pastor Emeritus Albert W. Ware and Evangelist Barbara Swearengen Ware (Memphis, TN), a brother to Minister Maurice Clifton (Portsmouth, VA), a brother-in-law to Mrs. Annette Clifton (Portsmouth, VA), Mr. Corey Ware and Evangelist Albernique Ware (both of Memphis, TN), an uncle to Dominique (Krystal) Tillett and a great uncle to their son (Portsmouth, VA). There are a host of uncles, aunts, cousins, god sisters, brothers, daughters and sons, other extended family and friends who are left to celebrate his memory.

The family of James A. Clifton Jr. created this Life Tributes page to make it easy to share your memories.

James Arthur Clifton, Jr. was born in Portsmouth, Virginia on...