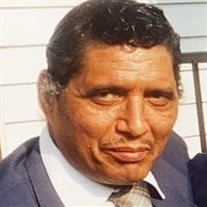 Hobert Larry Austin Sr., born January 10, 1938, in Akron, Ohio, called Portsmouth, Virginia home, departed this life on July 19, 2021. Larry spent his life serving his country in the Navy and his family as a devoted husband, father, and grandfather. He retired as a Chief Petty Officer with twenty plus years of service in the United States Navy and retired for a second time with over twenty-five years of service at LTV Steel Corporation. He worked night shifts at 7-11 while attending and graduating with Honors from Norfolk State University. Larry was never afraid of hard work and achieving his dreams. He was preceded in death by his wife, Betty Austin, son, Hobert Larry Austin Jr. Larry, his brother Deby Jones and grandson Kori Lambert. Larry is survived by his four daughters, Angela Baker (David), Carmen Wilson (James) Damita Lewis (Ben) and Rita Robinson to carry on his legacy. He also leaves to forever cherish his memory his grandchildren, Duane Lambert, Elton Austin, Taneisha Majette, Rosalyn Summey, Jelayne Lambert, Larry Austin III, Aaron Lambert, Michael Robinson, Bianca Baker, Jad’e Wilson, Jan’e Wilson and twenty great-grandchildren. Larry was affectionately known in his loved community of Cavalier Manor as The Hamburger or Mojo. He will be dearly missed by all and never forgotten. We shall see him again when we are all called home.

The family of Hobert Larry Austin created this Life Tributes page to make it easy to share your memories.

Send flowers to the Austin family.