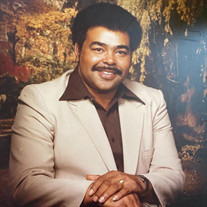 Herbert Louis Vaughan, son of the late Elvie Jordan and Joe Vaughan of Northampton County NC., was born on February 17, 1944. He transitioned on Friday, June 18, 2021 at his home in Portsmouth,Va. Herbert was educated in the Northampton County School after which he joined the US Army. After his service in the military, he joined the workforce at Ford Motor Company where he retired after 30 plus of employment. He was fondly known as “Big Bubble.” Herbert enjoyed his old westerns, but his heart was in hunting. Herbert was the president and a highly active member of Piney Grove Hunting Club in Jackson, NC. He lived each year for Hunting season and spent as many days in off season as he did in season at the hunt club feeding dogs, putting out corn, and prepping his trailer for the upcoming season. “The Boys” as he called the members of the hunt club were like family to him. He would smile as wide as the sky as he talked about their many episodes and shenanigans. Herbert was also a great supervisor. No matter what type of event it was, if he was present, he was supervising. He was also skilled on the grill and well known for his steam shrimp and crabs. But not only was he a skilled cook and hunter he was a beloved husband, father, brother, uncle, son and friend. Herbert was preceded in death by his daughter Jennifer Vaughan, Jackson NC and a son Michael Daniels Virginia, six sisters, Adell Long, Portsmouth VA., Nettie Scales, Portsmouth, Va., Ivey Fisher, Portsmouth, Va., Maggie Hicks, Suffolk, Va., Sarah Billups, Portsmouth VA., and Virdia Battle, Chesapeake, Va. He leaves to cherish his memories: his beloved wife, Norma Vaughan and one son Eric (Monica) Vaughan of Franklin Va. Four step-children Kimberly Britt of the home, Portsmouth Va., Dexter Britt, Roanoke Rapids, NC., Shanda Britt, Roanoke Rapids NC., and Antwione (Sherry) Orlando, FL. Three brothers, Bud Vaughan of Jackson, NC., Calvin Vaughan of Margarettsville, NC., and Eddie (Ed) Iona (Bee) of Norfolk Va. sixteen grandchildren and fifteen great grandchildren a host of nieces, nephews, great nieces and nephews, great-great nieces and nephews, cousins, other relatives and friends.

Herbert Louis Vaughan, son of the late Elvie Jordan and Joe Vaughan of Northampton County NC., was born on February 17, 1944. He transitioned on Friday, June 18, 2021 at his home in Portsmouth,Va. Herbert was educated in the Northampton County... View Obituary & Service Information

The family of Herbert Louis Vaughan created this Life Tributes page to make it easy to share your memories.

Send flowers to the Vaughan family.