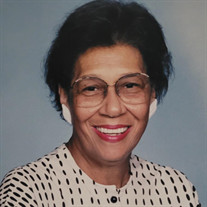 On June 13, 1928, Evelyn Nesben Davis was born in Norfolk, VA the sixth of six daughters to the late Samuel Davis (1891-1959) and Elouise Hughes Davis (1895-1961). She entered into everlasting life on June 21, 2021 at her home surrounded by her family. Evelyn grew up in Norfolk’s Titustown community and was baptized at the age of 12 in the historic Mount Pleasant Baptist Church (founded in 1863) where her mother was a life-long member; her grandfather, William Lawson Hughes (1869-1921), was chairman of the Board of Deacons and the builder of the church building and its parsonage in 1913; and her great-grandfather, Rev. Zachariah Hughes (1846-1915), was the Church’s first pastor for 35 years. She was educated in the Norfolk Public Schools, including Titustown School, Lott Carey School, and Booker T. Washington High School. One of her elementary school teachers was Mrs. Malloy, wife of Mt. Pleasant Church’s second pastor, Rev. Garfield Malloy. At Booker T. Washington High School, her great-aunt Nannie Hughes was her English teacher. As a young girl, she worked in the two Davis Grocery Stores owned by her father, a local businessman and real estate developer for over forty years until his death in 1959. During her young years, she attended beauty school where she trained as a beautician. In 1951, she met and married Willie L. Glover, Sr., a veteran of World War II from Chuckatuck, Virginia. To this union was born four children: Willie L. Glover, Jr., Cedric Delind Glover, Cindy Romaine Glover, and Tammy Renee Glover. Evelyn’s life was rooted in a deep and abiding faith in God. For many years she was a devoted member of St. John’s Baptist Church (Portsmouth, VA), the Leeward Civic League, and served as a caregiver for many of the community’s elderly. She was a tireless worker in St. John’s Church singing in the senior choir and playing piano for the Sunday School. She defined herself by her involvement in the life of her family, church, and community. She was known for her many acts of kindness to those in need. She earned high praise throughout the community for her delicious fruitcakes at Christmastime. The crowning achievements of her life were raising her four children, being a devoted wife for 54 years, and excelling as a homemaker. She was predeceased by Willie L. Glover, Sr., her husband of 54 years; her two sons, Willie L. Glover, Jr. and Cedric D. Glover, and her five sisters Elois Perryman, Cora Leone Merritt, Juanita Clarke, Sadie Campbell, and Dorothy Gardner. She is survived by her two daughters, Cindy R. Glover-Benson and Tammy R. Glover of Portsmouth, grandchildren, Tameka Glover, Ronald Garrrett, Jr. (Antoinette), and Chantel Jamison (Josh); great-grandchildren Nieron Torrance, Jada Sullivan, and Aneira Garrett; a brother-in-law Dr. Bernard Glover (Juanita); a host of cousins, nieces, nephews, great-nieces, and great-nephews; and many friends who cherish her memory. Yes, when this heart and flesh shall fail, And mortal life shall cease, I shall possess within the veil, A life of joy and peace. Sorrowfully, The Family

The family of Evelyn Nesben Glover created this Life Tributes page to make it easy to share your memories.

Send flowers to the Glover family.