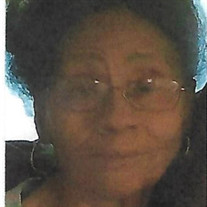 On December 2nd, 1927 Eula Belle (Smith) Slaughter was born. A native of Nash County, North Carolina, Mrs. Slaughter was the sixth child of the late Handsome and Mennie (Coley) Smith. She was preceded by two brothers – James and John as well as three sisters – Rosa, Odessa and Doretha. During her early teens the family settled in what was to become her hometown of Portsmouth, Virginia. There she would meet James Andrew Slaughter, a native of Portsmouth, Virginia and graduate of I. C. Norcom High School. The two teenage sweethearts married on April 19th, 1944 and settled initially in the Howard Park section of Portsmouth. Eula was a faithful military spouse for over ten years, supporting her husband’s military career as duty called him throughout the world. She loved to travel with her husband Sgt. James Slaughter and make new friends wherever they went. Eula returned to Portsmouth with James in 1954 and settled into their home in the 3200 block of Downes Street in the working middle class neighborhood of North Truxton. There they would raise their four children – Carlton (deceased), Karen, Kevin and Ken into productive citizens. The two would share a marriage filled with 53 years’ worth of memories until James’ passing on November 23rd, 1997. In addition to being an excellent parent and homemaker, Eula was a “working” mother with a career that saw her achieve as an assembly line processor with major Tidewater-area companies, including Starband, Inc., General Electric, Inc. (GE) and Southland Corporation where she retired in 1993. Eula was a central figure in her neighborhood for well over 70 years. Generations of adults and children that have grown up in Truxton know and love “Ms. Eula.” She welcomed people into her home and provided comfort and care when needed, whether it be with a home-cooked meal, a sympathetic ear to listen or an uplifting, humorous story from her lifetime of experiences to share as a life lesson. Building upon the recipes shared through generations of her family, her culinary talents were exceptional. Her homemade rolls and other specialties became a favorite of the community! In addition to talents in the kitchen she was also an accomplished seamstress and needlepoint crochet artist. On Saturday, December 2nd, 2017 in honor and celebration of her 90th birthday, Mayor John Rowe declared “Eula B. Slaughter Day” in the city of Portsmouth. Eula saw our nation, our state and our city evolve in her 93 years of life. As an African American woman, she witnessed landmark events in history - from the dismantling of Jim Crow laws and the desegregation of public school systems during the civil rights movement to the election of the first African American President and in November of 2020 exercised her final public act of citizenship casting her ballot for the first African American, female Vice President of the United States. On Saturday, July 3rd, 2021, “Ms. Eula” passed away peacefully at her home after completing her life’s course. She leaves behind to cherish her memory and continue the legacy of dedication to family and service to community: her children – daughter Karen D. Woods, sons Kevin R. Slaughter and Ken L. Slaughter, daughters-n-law Dana and Deborah Slaughter, grandchildren – Cytina W. Chavis, Wynton M. Woods, Sydney N. Slaughter, Veronica Slaughter, Carlton A Slaughter, Jr., Tyrone Weaver, LaMonica Weaver, a host of great grandchildren, nieces, nephews, cousins and extended family and friends. We love you mom – always and forever. Karen, Kevin & Ken

On December 2nd, 1927 Eula Belle (Smith) Slaughter was born. A native of Nash County, North Carolina, Mrs. Slaughter was the sixth child of the late Handsome and Mennie (Coley) Smith. She was preceded by two brothers &#8211; James and John... View Obituary & Service Information

The family of Eula B. Slaughter created this Life Tributes page to make it easy to share your memories.

Send flowers to the Slaughter family.