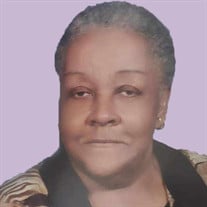 Esther Moore Watson, transitioned to be with the Lord on Sunday, December 19, 2021, at the age of 86. Esther was born on August 5, 1935, in Portsmouth, Virginia to the late Cal Moore (owner of C. H. Moore and Sons Shoe Repair Shop) and the late Esther Chalk Moore-Mizell. She was educated in the Portsmouth Public School system. Esther was later married for 66 years to Sanders Watson, Jr. and from that union, they were parents to nine children. She was formerly employed with GE Corporation and spoke all the time of the fun that she had while working on the line and all of the potluck lunches and sneaking a peak at the soap operas that were taking place while working. After the closing of the GE plant, she earned her nursing certificate and later worked at William T. Hall Nursing Home as a nurse’s aide. Her early walk with Christ began at Temple Bethel (Church of God Saints of Christ) where she sang in the choir, and later joined Third Baptist Church in the City of Portsmouth. In 2001, she joined Saint Mark Missionary Baptist Church where she served on the Pastor’s Aid Ministry and was a member of the Tribe of Naphtali. She served her church faithfully until her health started to decline. If there is one thing you can say about her is that she loved her church family and spoke highly of Bishop Curtis Edmonds. Esther wore many hats in her life from wife, mother, aunt, grandmother, sister, friend, babysitter, and counselor. She was truly a lover of family as she had a way of making everyone, especially her grandchildren feel like they were her favorite. She loved sewing, gardening, baking, and word search puzzles which she would sometimes spend all day working on. You could always find her favorite shows streaming on TV: NCIS, Law and Order, Chicago PD, and Judge Judy, which she always found the court shows the funniest. Along with her parents, she is predeceased by five brothers: Sherman Moore, Sidney Moore, Howard Moore, Cal Moore, and Carlton Moore; two sisters: Maude Lee Spies and Wilhemina White, and one grandchild Angela Watson. In addition to her husband Sanders, she is survived by her children: Melvin Watson (Gloria) of Upper Marlboro, MD, Reginald Watson (Lee Ann) of Radcliff, Kentucky, Diana Davis (Alvin) of Portsmouth, VA, Andre Watson (Rosa) of Suffolk, VA, Allen Watson (Mary) of Chesapeake, VA, Ricky Watson of Norfolk, VA, Bonnie Wells (Jason) of Dumfries, VA, Lisa Watkins (Michael) of Oxon Hill, MD, and Ronald Watson (Sheila) of Lady Smith, VA. She is also survived by seventeen grandchildren: Nateace, Melvin Jr., Joshalynn, Reginald Jr., Kelvin, Melissa, Marquita, Tonja, Alicia, Martina, Rishawn, Ryan, Martasia, Akia, Jason Jr., Bianca, and Michael Jr., and fifteen great grandchildren. Her memory will always be cherished by those she met along the way, those friends who were like family, the children she helped to nurture and raise (Lakeya, Ciara, and Chanel) they all knew they were not far from her heart. Mom you were the epitome of Esther spoken about in God’s word, the Jewish girl who saved her people because you have truly led us in a way that showed us the heart of God.

Esther Moore Watson, transitioned to be with the Lord on Sunday, December 19, 2021, at the age of 86. Esther was born on August 5, 1935, in Portsmouth, Virginia to the late Cal Moore (owner of C. H. Moore and Sons Shoe Repair Shop) and the late... View Obituary & Service Information

The family of Esther Moore Watson created this Life Tributes page to make it easy to share your memories.

Esther Moore Watson, transitioned to be with the Lord on Sunday,...

Send flowers to the Watson family.