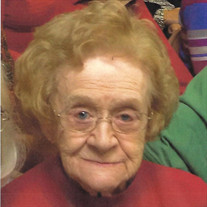 Emma Kate Thomas Warren, 99, passed away peacefully during her afternoon nap in her residence at King’s Grant House Assisted Living in Virginia Beach, Virginia, on Saturday, June 5, 2021. She is survived by her daughter, Carol Warren Spencer, of Virginia Beach, Virginia, her son, Jerry Wayne Warren (Sharon), of Portsmouth, Virginia and her sister, Shirley Jean Thomas Graybeal, of Zionville, North Carolina. She is also survived by five grandchildren, Donna Spencer, Darrin Spencer (Christy), Matthew Warren (Aga), Andrew Warren, and Alyson Warren Conrad (David). She also has five great-grandchildren, Jessica Spencer Bolin (James), Joshua Spencer (Shannon), Jordan Spencer (Carrie), Jakub Warren and Vincent Conrad. She also has four great-great -grandchildren, Harrison Bolin, Elijah Bolin, Josie Bolin and Norah Bolin. Additional survivors include several beloved nieces and nephews. She was predeceased by her parents, George Hamilton Thomas and June Pearl Robinson Thomas; three sisters, Blanche Thomas Isaacs, Nena Thomas Snyder, Ruby Thomas Oliver; two brothers, Lee Thomas and Grant Thomas. She was born on May 19, 1922, in Watauga County, North Carolina, where she lived with her parents on their family farm. She graduated from Cove Creek High School in 1940, and married her childhood sweetheart, James Blaine Warren, on December 24, 1941. They lived on their own farm in Watauga County near their brothers and sisters and their farms and families until 1951. They had two young children at that time and decided to move their family to Portsmouth, Virginia, where they lived and worked until they retired. After her husband passed away in 1994, Emma Kate continued to live in their house by herself until she was almost 90 when she moved into Assisted Living in Virginia Beach near her daughter. Mom, our hearts are saddened and hurting now, but we know that you have been longing to see your family in Heaven. You started singing in your 90s and we thought that was stunning to hear you start belting out tunes everywhere and anywhere. Among your favorites were The Old Rugged Cross and Shall We Gather by the River. We have so many wonderful memories of you and will always keep you close in our hearts. . . . Your Family

Emma Kate Thomas Warren, 99, passed away peacefully during her afternoon nap in her residence at King&#8217;s Grant House Assisted Living in Virginia Beach, Virginia, on Saturday, June 5, 2021. She is survived by her daughter, Carol... View Obituary & Service Information

The family of Emma Kate Thomas Warren created this Life Tributes page to make it easy to share your memories.

Emma Kate Thomas Warren, 99, passed away peacefully during her...