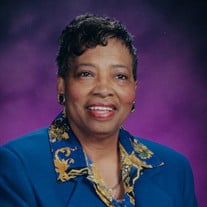 Eloise Hopson Baker passed away on March 15, 2022. She was born on December 4, 1940, in Portsmouth, VA, to the late Junius W. Hopson, Sr. and Sallie C. Hopson. Eloise graduated from I. C. Norcom High School in June 1959 and received a Bachelor of Science in Elementary Education from the Norfolk Division of Virginia State College in Petersburg, in June 1965. She also received a Master of Arts Degree from Hampton Institute in May 1972. Eloise taught in the Portsmouth School System and retired as a Guidance Counselor at Lakeview Elementary School in Portsmouth, VA. After retirement, she served at the Fairwood-Agape Baptist Church, with the love of her life, Dr. Robert L. Baker, Sr. She always sung before he preached. Bob often said that “people asked him to preach so they could hear Eloise sing.” She worked with the children and did secretarial duties when the church first started. She was loved and respected by many on the local, state and national levels within the Southern Baptist Convention. She was a woman of strong faith, determination and will. Whatever she did, it was accomplished to the best of her ability. Eloise was a strong woman as she persevered through the trials of life. Eloise fought the good fight, she finished the race, she kept the faith and has received “the crown of righteousness.” Eloise is survived by her sister-in-law, Cynthia K. Hopson; brother-in-law, Walter Smith; and a host pf nieces, nephews, cousins and friends. She was predeceased by her husband, Dr. Robert L. Baker, Sr. and son, Robert L. Baker, Jr. In addition to her parents, she was also predeceased by her sister, Audrey Smith, and her brother, Elder Junius W. Hopson, Jr. Eloise will be missed, but not forgotten. We THANK God for loaning her to us for these eighty-one years.

Eloise Hopson Baker passed away on March 15, 2022. She was born on December 4, 1940, in Portsmouth, VA, to the late Junius W. Hopson, Sr. and Sallie C. Hopson. Eloise graduated from I. C. Norcom High School in June 1959 and received a Bachelor... View Obituary & Service Information

The family of Eloise H. Baker created this Life Tributes page to make it easy to share your memories.

Send flowers to the Baker family.