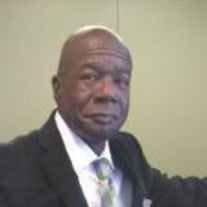 Softly and tenderly, the Heavenly Father lovingly called Ellis Augustus Fuller, Jr. into his eternal rest on Tuesday, December 15, 2020. On September 16, 1955, Ellis was the first child born to loving parents, Ellis, Sr. and Barbara Jean Fuller. Educated in the Portsmouth Public Schools, Ellis (or “Phil” as he was affectionately known) attended Truxton and Douglas Park Elementary Schools as a child, and graduated in the Class of 1973 from Manor High School. He continued his education at Norfolk State University. Ellis was a talented young man who throughout his life continued to explore his gifts of song writing, poetry, singing, composition, and sketch-art. After college, he started his career at The Norfolk Naval Shipyard, moved on to a position at Mitsubishi Chemicals, and was well-known for his position with Stark & Legum Men’s Boutique. His life’s pursuit was to be the best father, confidante, and role model to his beautiful daughters: Shantell, Brooke, and Hollie. Ellis was kind, loving, helpful, and always willing to lend a hand in whatever he could do to bless someone. He often volunteered his time to run errands, give to elderly neighbors, and to cut the lawns for those who could not do it for themselves. In 2002, Ellis dedicated his life to the Lord Jesus Christ, and became an active member of Holy Light Church of Deliverance. His love for the Lord was apparent, and he was honored to share his experience with others. Ellis was a faithful officer of the Deacon Board, and the Men’s Security Team. One of the joys of his life was serving as Armor bearer to his Bishop. He honored the man of God, and assisted him with great integrity, loyalty, and love. In 2009, Ellis married the love of his life, April Gayle-Fuller. Along with his wife, Ellis gained three bonus children: Crystal, Tashandra and Preston. With so much love to give, he wholeheartedly opened his arms to them as loving fathers do, which was an answer to their prayers. He was the example of a true man of God in their lives. Ellis showered his love onto his grandchildren and godchildren, and always proved that there was never anything that he wouldn’t do for his family. Indeed, he was loved, and will be greatly missed by all. Ellis was survived by his devoted wife of 11 years, April L. Gayle-Fuller; five (5) daughters: Shantell Brewer (Antwone), Brooke Fuller, Hollie Fuller, Crystal Tyler, and Tashandra Gardner; one son, Preston Gardner (Maidina); seven (7) grandchildren: Avon, Markell, Regan, Emory, Mackayla, Mya and Londyn; his parents, Ellis A. Fuller, Sr. and Barbara Jean Fuller; one sister: Shelia Brown (Darnell); two (2) brothers: Larry Fuller (Angela), and Thomas Fuller (Cathy); one aunt: Selena Lundy (Minister Allen); three (3) uncles: Michael Benton, Chester Benton, and Morris Benton; four godchildren: Destiny, Jianni, Gabriella, and Syrus; as well as a host of nieces, nephews, cousins, and dear friends.

The family of Ellis Augustus Fuller, Jr. created this Life Tributes page to make it easy to share your memories.