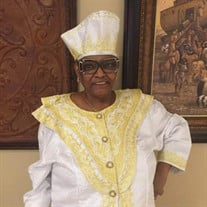 Audrey Lemarn Tate Johnson, was born in Mobile, Alabama to the union of the late Bishop Louis Rasby Tate and the late Sister Florence Lemarn Tate on August, 15 1945. Audrey was brought up under the tutelage of her father Bishop Louis Rasby Tate in the Holy Church of God, Mobile Alabama, where she gave her life to the Lord at an early age. She faithfully served in numerous ministries both in Michigan and in the state of Virginia. She was currently an active Servant of God in All Nations Church, in Newport News, VA, until her lengthy illness and her transition. Audrey was educated in the Mobile Public School System, graduating from Blount High School. She enrolled in Wayne County Community College, Wayne State University, and The University of Detroit; where she earned both Bachelors and Master’s Degrees. While working in the Public School System of Detroit Audrey’s gift of love for the under privilege was very evident until retirement. Audrey had a vast knowledge of teaching Special Education, helping many students through their journey called life. She enjoyed teaching and nurturing them both spiritually and naturally and made a difference in many lives. Audrey retired after teaching for 20 years from the State of Michigan Education Board. On Saturday, September 10, 2021 God called Audrey to her heavenly Mansion on High, where she emphatically stated she was ready to go. Leaving to cherish her memories: A loving Dog, (Shug) whom she passionately loved, Four Sisters: Eunice Pugh, Tuskegee, AL, Ester Adams, Birmingham, AL, Damita Turner (Luther), Chatham, VA, and Ruth Coachman (Anthony), Mobile AL Two Brothers: Louis Tate, Birmingham, AL and John Tate (Victoria), Tuskegee, AL, Spiritual Son: Richard Tawiah, (Accra) New York. 1 Sister preceded her in death, Jose Celeste Lewis, Two beautiful daughters preceded her in death, Andrea Horton (Darrell), and Alexia Williams (Timothy). Herself acclaimed adopted Son, Shaun, preceded her in death. Ten grandchildren, Several great grandchildren, a host Spiritual Sons & Daughters and a host of nieces, nephews and other relatives and friends. Special niece, Audrey Spruill, who is caregiver of The Late Elder Audrey’s loving dog (Shug). Best friend and Devoted Sister & Brother-In-Law to the very end, (Damita and Luther Turner).

The family of Elder Audrey Tate-Johnson created this Life Tributes page to make it easy to share your memories.

Audrey Lemarn Tate Johnson, was born in Mobile, Alabama to the...

Send flowers to the Tate-Johnson family.