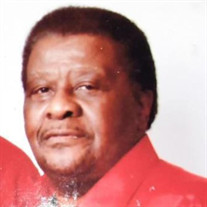 Brother Edward Lee Futrell transitioned to his heavenly home to be with the Lord on Friday, September 3, 2021. Brother Futrell was born to the late Jessie and Wille Futrell on November 26, 1939. Brother Futrell’s greatest joy was his family. A loving husband and father, he took in providing for them. Although he possessed and enjoyed sharing his many skills and interests, he selected Norfolk and Southern Railroad as the best means to support family. He retired after approximately 30 years. Known to many as Mr. Ed, Uncle Ed, and Edward Lee he embraced his family; and frequently extended such hospitality to friends, co-workers and acquaintances of family and friends. He always had a good story to tell, anyone who would listen. Another one of his passions was passing on wisdom to the young people that equally embraced him. Brother Futrell was preceded in death by his bride of 61 years, Mamie Futrell (2019), His son Edward Lee Futrell Jr. (aka Sonny), Jesse Futrell Jr. and Lonnie Futrell. Edward L. Futrell leaves to cherish his memory his sister Ailene Mitchell of NC, his daughter Anita Washington whom he referred to as “baby girl” (Michael aka Kirk), granddaughters; Cheryle Macon (Zakee) of Richmond, VA, Valerie Washington of Brooklyn, New York, Michelle Washington of Binghamton, New York, goddaughter Barbara Bishop, grandsons Darryl Futrell of Portsmouth, VA, Michael Washington of Binghamton, New York, 13 great-grandchildren, 4 bonus sisters, 2 bonus brothers, a host of nieces and nephews., and many friends.

Brother Edward Lee Futrell transitioned to his heavenly home to be with the Lord on Friday, September 3, 2021. Brother Futrell was born to the late Jessie and Wille Futrell on November 26, 1939. Brother Futrell&#8217;s greatest joy was his... View Obituary & Service Information

The family of Edward Lee Futrell created this Life Tributes page to make it easy to share your memories.

Send flowers to the Futrell family.