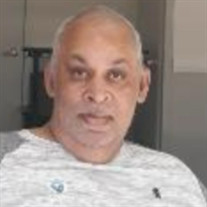 Dwight Deleanor Epps was the second son of Mr. and Mrs. Henry and Martha Aquilla Boekhoudt Epps born on September 28, 1954. At a young age he professed a hope in Christ and joined First Baptist Church of Taylorsville under the leadership of Rev. T. M. Steel. In 1972 Dwight became a member of the United States Marine Corp where he served his country with honor and dignity. After military service to his country he was employed as a lineman at General Electric Company. Dwight, a Steeler for LIFE, enjoyed football especially the Pittsburg Steelers. He also loved fishing and spending time with his family and looked forward to the gatherings. On April 11, 1979, one of Dwight’s greatest days, he was blessed with a son Steven Mitchell. Dwight and his baby sister Lisa had many special moments while he resided with her but none more precious than the daily bible study they shared. Every morning he would call his younger brother Michael to reminisce about cars and traveling. His favorite vehicle was the Cadillac Escalade which he often talked about and rarely did he hang up without asking about “the lil cutiepie” Mariah. Now Dwight really looked forward to his visit from his baby brother Terry because he always brought him his favorite food. His brother Ricky received numerous fun-loving calls from Dwight and would drive down from Maryland to visit him. The family who have gone on before are: His parents Henry and Martha Epps, sister Katie Epps Atkins, brother Henry Epps and Nephews Denardo Harrison and Ricardo Bullock. Dwight memories will be cherished by his son Steven Mitchell, Sister Lisa Bullock, Portsmouth, VA. Three brothers: Michael (Diann) Epps, Camden, AR, Linwood (Cynthia) Epps, Fort Washington, MD and Terrance (Valerie) Epps, Portsmouth, VA. Three nieces: Venus (Larry) Boyd, Little Rock, AR., Kayla Epps, Fort Washington, MD and Alinah Ballard Epps, Chesapeake, Va. Four Nephews: Travis Epps, Alabaster, AL, Charles, (Sarenthia) Epps and Nicholas Epps, Little Rock, AR and William Ballard, Virginia Beach, VA. Four Aunts: Gloria Cannon, Rhoda Boekhoudt, Cora Boekhoudt and Delores Boekhoudt. There are numerous great nieces and great nephews, cousins, and friends. Even though I walk through the valley of the shadow of death, I will fear no evil, for you are with me; our rod and your staff they comfort me. Psalm 23:4.

Dwight Deleanor Epps was the second son of Mr. and Mrs. Henry and Martha Aquilla Boekhoudt Epps born on September 28, 1954. At a young age he professed a hope in Christ and joined First Baptist Church of Taylorsville under the leadership of... View Obituary & Service Information

The family of Dwight Deleanor Epps created this Life Tributes page to make it easy to share your memories.

Dwight Deleanor Epps was the second son of Mr. and Mrs. Henry...

Send flowers to the Epps family.