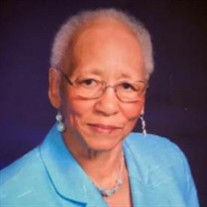 On Wednesday morning, April 14, 2021, Dorothy T. Byrd, age 87 entered into eternal rest and gained her wings. She was born on December 16,1933 to the late William H. Tynes and Bertha E. Tynes-Batten. In her early years she attended Christian Home School and then went on to attend Ebenezer School. She finished her education at Isle of Wight Training School where she only completed the 6th Grade as she prepared to start working early in life. Her first job was at the Oyster House when she was a young teenager. In her later years she went on to work at the Smithfield Packing Plant, Dominion Power, General Electric and the School System as a bus driver when needed and a cafeteria worker. She retired from Westside Middle School in 1998. At an early age she gave her life to the Lord and was baptized at New Jones Grove. In her early twenties she was married to the love of her life James H. Byrd as she so affectionally called “JB” at Ebenezer AME Church on August 3, 1957. If you knew Dorothy, you knew that she loved her “JB” and from their union they raised two loving sons. Several years later when Ebenezer AME merged with Brown’s AME she became a member of Brown’s AME Church where she was a faithful and dedicated member until her health failed and she was no longer able to serve. Dorothy sang in the choir, was a part of the culinary team, worked as a missionary, a stewardess and was always willing to help wherever needed. Dorothy loved the Lord, her family and her church. She always believed in preparing her outfit for Sunday service, as well as anyone else’s outfit in the house that was going to attend worship with her and always prepared dinner on Saturdays. Sundays for Dorothy was about singing, praising the Lord and spending time with family. She was a mean seamstress and knew how to bring a simple pattern to life. No one would enter her home without being fed one of those awesome meals she prepared. Dorothy was known for giving advice and could talk to you late into the midnight hour. Her style was truly classy, with a hint of sassy and it was not uncommon for her to wear a hat with every outfit. She loved to shop till she dropped and then shop some more. There was nothing she would not do for her family and the way she loved her grandchildren was second to none. She was preceded in death by her parents William H. Tynes and Bertha E. Tynes-Batten, husband James H. Byrd, son Frederick Tynes, grand-daughter Duwanna Barnes, brothers William T. Tynes, James L. Tynes and Franklin A. Tynes. Dorothy leaves to cherish her memory one son Pernell Byrd (Lillian), five grandchildren Felicia Warren, Shelby Boykins (Donald), Bruce Warren (Cassandra), Kristina Green (Riccardo), Claudia Martin (Carl), 11 great grandchildren, 7 great- great grandchildren (special acknowledgement to Marquil & Monyell Birchette who lived with her and helped care for her). Two sisters Virginia Blow and Maxcine Hilliard and one brother Wilbert Tynes (Lorraine), four aunts Martha Whitaker, Mary Frances Everette, Clarice Uzzle (Walter) and a host of nieces, nephews, cousins and friends.

On Wednesday morning, April 14, 2021, Dorothy T. Byrd, age 87 entered into eternal rest and gained her wings. She was born on December 16,1933 to the late William H. Tynes and Bertha E. Tynes-Batten. In her early years she attended Christian... View Obituary & Service Information

The family of Dorothy T. Byrd created this Life Tributes page to make it easy to share your memories.

Send flowers to the Byrd family.