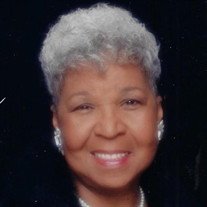 The journey of life for Dora M. Harris came to a sunset when God called her from labor to rest on December 5, 2020 surrounded by her family. Dora was born in Portsmouth, Virginia and the youngest of three sisters and two brothers born to the late Riley and Stella McGlone. Dora received her primary and secondary education in the Portsmouth Public School System. She received her Bachelor of Science Degree in Sociology from Virginia Union University, a Bachelor of Science Degree in Elementary Education from Virginia State University, a Master Degree in Elementary Education from Hampton University and a Masters Degree in Administration from Old Dominion University. Her teaching career began in the Portsmouth School System but has been varied and diversified. She also taught in the elementary school systems in Bad Nauheim, Germany; Fort Riley; and Fort Leavenworth; Kansas and West Virginia State University. After twenty-five years of a most gratifying teaching career in the Portsmouth School System, Dora concluded her service as Principal of Westhaven Elementary School, and retired in May 1991. Dora was a former member of St. James and St. Mark Episcopal Churches. She served as the first female Vestry person at St. Mark, a position she dearly cherished. Later, she joined her husband at Third Baptist Church and became a member of the Trustee Wives organization and later served as the chairperson. She was also a member of Female Usher Board 2; Sunday School Class 12; Cheerful Givers; former member of the Church Kindergarten Board; and Youth Tutorial Program. One of her most significant accomplishments, on behalf of Third Baptist Church, was coordinating a successful 100-pint blood drive for the American Red Cross in 1999. In January 2003, she became an active and dedicated member of Grove Church and served on the Tribal, Women’s, Seniors, Mission Ministries and Church Volunteer, all of which she dearly loved. Her organization affiliations included: Delta Sigma Theta Sorority, Inc.; Links, Incorporated, Portsmouth Chapter; Pinochle Bugs Incorporated; Jack and Jill Incorporated; and the Holidays Social Club. While teaching, caring and counseling children were her first love, her most notable accomplishment was serving as Chairperson, Dress and Presentation for the Eureka Debutante Cotillion. While serving in this capacity for over 22 years, she enriched the lives of many of our future leaders of tomorrow. She has also provided her services as a surviving cancer counselor, assisting others who were fighting this dreaded disease. Dora was a very energetic, goal-oriented, loving person who always sought to raise the bar in whatever activity that she was involved in. She leaves to cherish her memory her loving husband of 65 years, LTC Warren S. Harris (Ret); two sons Warren D. Harris (Gina), of Chesapeake, VA; Derryl C. Harris (Patricia), of Reston, VA; adopted son David Anderson (Rosaland) three grandchildren, Lindsay, Warren D. II, and Derryl C. II, a host of friends and relatives, including our special social group. In lieu of flowers, please make donations to the Marriner Christian Academy, P.O. Box 6219, Portsmouth, VA 23703

The journey of life for Dora M. Harris came to a sunset when God called her from labor to rest on December 5, 2020 surrounded by her family. Dora was born in Portsmouth, Virginia and the youngest of three sisters and two brothers born to the... View Obituary & Service Information

The family of Dora M. Harris created this Life Tributes page to make it easy to share your memories.

The journey of life for Dora M. Harris came to a sunset when...

Send flowers to the Harris family.