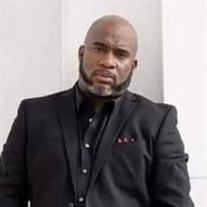 Deshawn Smith was born on September 6,1979, in Brooklyn, NY, to the late Iris Smith and Edward Baker. On June 26,2021,he earned his wings and went from labor to reward. Deshawn’s giving spirit radiated to everyone he met, and he will be sorely missed. Affectionately known as Brooklyn Brawler, Deshawn was a loving husband, devoted family member, and loyal friend. He was a kind-hearted, selfless, and genuine person who always had an encouraging word to share with anyone who crossed his path. He was deeply rooted in his morals, values, and beliefs. A true man of unparalleled integrity, Deshawn displayed an undeniable commitment to his wife, family, and friends. Deshawn was educated in the New York City Public School System. In 1997, he graduated from East New York High School of Transit Technology. A beloved and respected Trojan, Deshawn attended Virginia State University, where he received his Bachelor of Science in Electrical and Electronics Engineering Technology. While at Virginia State University, Deshawn was initiated on April 4, 2001, into the Alpha Phi Chapter of Kappa Alpha Psi Fraternity, Incorporated. He loved his frat brothers (especially his LBs ~ The Testifying Ten) and took great pride in his fraternity. He continued on to receive his Master’s Degree in Business Administration from Averett University. Deshawn began his career working at Infineon as a Process Engineer. However, one year later he transitioned to the Newport News Shipyard where he became a Senior Project Engineer. After thirteen years of employment, Deshawn moved to Washington D.C to continue his line of work as a Project Manager with the Department of Defense. He understood the value of hard work and ensured to always go above and beyond the call of duty. Deshawn met the love of his life Athena Smith through a mutual friend, Leah Davy. After a whirlwind romance, they were married on August 23, 2008, at the Founder’s Inn in Virginia Beach surrounded by family and friends. Deshawn and Athena enjoyed spending quality time with each other and savored every moment they had together. From vacations, to wine tastings, to the simple pleasures in life, their unbreakable bond stood the test of time and will continue to sustain Athena in the days to come. He was preceded in death by his grandmother, Juanita Baker; his grandfather Edward Baker; his mother, Iris Smith; and his cousin, Kahliq Francis, who was like a brother. Deshawn leaves to cherish his memory his devoted wife, Athena Smith; his father, Edward Baker, Jr of Brooklyn, NY; his spiritual mother & aunt, Jeanette Washington of Long Island, NY; four brothers, Coren Washington (Jocelyn), Amir Williams, Amare Williams and Shaquan Perry of Brooklyn, NY; one sister, Nakiya Baker of Brooklyn, NY; one uncle, George Washington of Brooklyn, NY; parents-in-laws Phillip Sr. and Brenda Smith of Newport News, VA; brother-in-law Phillip Smith Jr. (Kaira) of Suffolk, VA and a loving host of godchildren, nieces, nephews, cousins, cherished family, Fraternity brothers, VSU Alumni, co-workers, and friends. He brought joy and a smile to everyone in his life. His legacy will live on with those who loved him

Deshawn Smith was born on September 6,1979, in Brooklyn, NY, to the late Iris Smith and Edward Baker. On June 26,2021,he earned his wings and went from labor to reward. Deshawn&#8217;s giving spirit radiated to everyone he met, and he will be... View Obituary & Service Information

The family of Deshawn E. Smith created this Life Tributes page to make it easy to share your memories.

Send flowers to the Smith family.