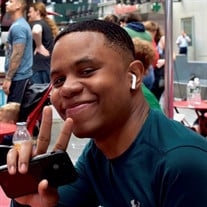 Demar(Tuggah) Ramsey passed away at Robert Wood Johnson University Hospital on December 20,2021 at 2:52pm at the age of 28 years young. Demar is predeceased by his father Kelvin Jenkins; Grandmother(s) Lucielle Mullen,Linda Tillmon and Mildred Ramsey.Grandfather Cleo Jenkins and Brother(s) Clarence(Reggi)Rowe, Kelvin(Pee-Wee) Key and Uncle Leroy Ramsey. Demar left behind his mother Arlonda Ramsey and Partner Jennifer Osorio. Demar is lovingly remembered by his Sisters Ni’Jala(Scales)Murray/Jonathan Murray, Michella Jones and Laurel Jones. Brothers Jonta Ramsey, Dion Gordon/Robin Gordon,Brandon Copeland, Joshua Jenkins, Aaron Jenkins and Larnell Wiggs.Nephews Honest Murray and Samonte Ramsey-Austin. Cousins Almonta Ramsey, Michele Ramsey, Michonda Ramsey, Tykquielah Trotter, Antione Flora and Keon Singleton.Aunts Makeyda Ramsey, Junita Jackson and Crystal Landers-Morgan/Maurice Landers-Morgan. Uncles Therodore Tillmon and Antonio Tillmon. Grandfather Ralph W. and many other loved ones. Demar was born in Washington,DC in Greater Southeast Community Hospital on October 26,1993.He graduated from Franklin High School in Somerset NJ. He lived in Chesapeake,Va where he was raised. At the age of 18 he relocated to New Jersey where he established his second home. Demar worked as valet Supervisor at Jersey Shore University Hospital; Demar also specialized in Shoe Shine and Repair. Demar had a love for many different things including Family,Friends,Music,Skateboarding and Playing Video Games. Demar was a loving and kindhearted person; Demar was a survivor in many different ways.He was a big help to his community he participated in many events to support other survivors like himself and individuals who were still on their journey. Demar wore his smile everyday no matter what life came with. He was nothing short of a true gentleman and that's what family and friends admired the most. If there was a hand in need demar would lend his without hesitation. Demar had very ambitious ways; he also had high hopes and wasn't afraid to dream big and do what he had a passion for. He never allowed anyone or anything to get in the way of his desires. Demar beat his battle with bone cancer in 2015 and fought his battle with leukemia head on. Demar left this world spreading love and helping others. Demar was truly a God send and loved by many. He will be missed

The family of Demar Ramsey created this Life Tributes page to make it easy to share your memories.

Send flowers to the Ramsey family.