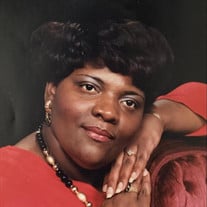 Deborah Elizabeth Rainey, 69 of Chesapeake, VA departed this life on February 28, 2021 at Chesapeake Health & Rehabilitation Center. Deborah was born on June 3, 1951 to the late John and Elizabeth Drew Rainey in Norfolk, VA and was raised by a very devoted aunt the late Gloria H. Goode. She attended Portsmouth Public Schools where she graduated from Cradock High School in 1969. After graduation, Deborah started working for Norfolk Naval Base and SMA before going to Hampton Roads Transit aka Tidewater Regional Transit where she retired after 15 years of service. After retirement, she just couldn’t sit still deciding to take a job working for the City of Chesapeake in the janitorial department and Portsmouth Public Schools as a bus monitor until her health declined. Deborah was a faithful member of Mount Hermon Baptist Temple in Portsmouth, VA where she had a passion in being a member of various committees such as the president of the Missionary Ministry, Kitchen Ministry, Women’s Usher Board, and the Women’s Ministry. She was a member of the Mount Hermon Association and HRT Union. Deborah loved to travel, loved her family, she was a historian, very socialable, a great friend, and she was a “DIVA who will be greatly missed!” She leaves to treasure her memories: 2 sisters Joan and Joyce (Loretta); 5 sisters whom she was raised with: Jacquelyn Roberts (Larry); Angela Goode, Gloria Walker (devoted caretaker), Telaza Moore, Jereena White (Carlton); 3 brothers whom she was raised with: Lewis Goode Jr., Lloyd (Thelma) and Keith Goode; 2 goddaughters TeRae & TeNeice; close friends Doris, Kim, Cheryl, and Helen; special aide Bertha Martin; and a host of nieces, nephews and friends. Deborah was predeceased by her parents, Gloria H. Goode and Joseph Goode.

Deborah Elizabeth Rainey, 69 of Chesapeake, VA departed this life on February 28, 2021 at Chesapeake Health & Rehabilitation Center. Deborah was born on June 3, 1951 to the late John and Elizabeth Drew Rainey in Norfolk, VA and was raised by... View Obituary & Service Information

The family of Deborah Elizabeth Rainey created this Life Tributes page to make it easy to share your memories.

Send flowers to the Rainey family.