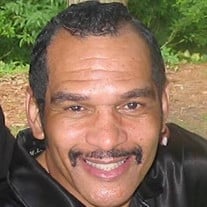 “When you’re in trouble don’t cry.” You can hear Cornelius E Yancey’s melodic tenor voice ringing out as he sang the words to that song. With the Kind David’s Harp he would take center stage singing the “Lord’s Prayer”. He had a voice that would make all take notice. His voice first rang out in this world on July 20, 1950 in Portsmouth, Virginia when he was born to Evangelist Cornelius Emanuel Yancey Jr. and Mother Sarah Dorothy Marie Yancey. Cornelius attended Southwestern Elementary School and later graduated from Crestwood High School 1969. He was drafted into the United States Army in 1971 during the Vietnam War. He served 8 years during which time he became a medical specialist. June 7th, 1971 he married the love of his life Glenda Joyce Cummings in Portsmouth, Virginia. They resided in Chesapeake, Virginia and raised their family. Cornelius held various jobs including assembly line worker at General Electric and eventually retired from Civil Service at the Norfolk Naval Shipyard. Through his life Cornelius loved singing. He was an active member of the Church of God and Saints of Christ under the leadership of his father Evangelist Cornelius E. Yancey Jr. He sang in the choir and served as Sabbath School Superintendent. He was ordained Deacon on April 20th, 1990 and later served under his brother Elder David Leon Yancey Sr. Not only did he love to sing but he loved to hear good singing. He traveled near and far singing with the King David’s Harp, a group consisting of his brother and cousins. He also organized groups with his children, nieces, nephews and cousins: The Harmonizing Trio, AJ & the 3 M’s, Four of a Kind and the Four Trumpets to name a few. Cornelius Yancey was a family man. He loved family and would give his last dollar to help anyone in need. He would also give of his time to listen to anyone that was despondent and needed a word of encouragement. You could always find him smiling and anytime you asked how he was doing the response would be a resounding, “MARVELOUS”. You could count on being blessed when you left his presence because he would always say “May God bless you and go with you”. He was lovingly called “Cornie” by those closest to him. He filled many roles in the lives he touched. He was counselor, brother, disciplinarian, father figure, teacher, philosopher. Cornelius Yancey peacefully slept May 3rd, 2022. He was predeceased by his father, Evangelist Cornelius Emanuel Yancey Jr.; his mother, Mother Sarah Dorothy Marie Yancey; his wife, Glenda Joyce Cummings-Yancey; 2 sisters, Joyce Angela Yancey & Pamela Yancey-Bell. He leaves to cherish his memory: 4 children, Monica Brown (William), Anitra Yancey, Cornelius E. Yancey IV, and Nikia Tull (Sean); 2 godsons, Chris Ward and Joshua Yancey; 6 grandchildren, Denitria Hayes, Demetrious Hayes, Lavelle Tull, Chyna Tull, Keyniya Yancey and Angela Brown; 5 brothers, David Yancey Sr, Gregory Yancey (Cheryl), Calvin Yancey (Yolanda), Lester Yancey, and William Yancey; 3 sisters, Brenda Huff (Henry), Velma Yancey-Scarbor (Earl), Gwendolyn Benita Murrell (Kimbrew) and a host of nieces, nephews, cousins, other relatives and friends. For religious organizations there is no required attire.

The family of Cornelius Emanuel Yancey, III created this Life Tributes page to make it easy to share your memories.

“When you’re in trouble don’t cry.” You can hear Cornelius E...