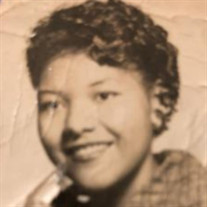 Charlotte Ann Owens White, daughter, sister, special aunt/mother and friend, took her last step on March 20, 2021 to answer God's call. She slipped quietly away to join her parents, Charles and Martha Owens, her beloved nephew Quentin H Tanner and most recently, her little brother, Ret. Major Charles D. Owens. Born on January 28, 1940 in Cape Charles Virginia, Charlotte was the oldest daughter of Charles and Martha Owens' five children. Charlotte had an unyielding desire for excellence. She received her primary and secondary education in Norfolk County Public Schools (Chesapeake Public Schools). She was the first female president of the Student Government Association in Norfolk County Public Schools. She was also a member of the Guidance Club, the president of the English Club, and a member of the school choir. Charlotte loved to sing and had a beautiful soprano voice. Charlotte was a member of First Baptist Church Crestwood, where she accepted Christ and was baptized in September 1953. She was a faithful member of the church, participating in Sunday school and was a member of the Junior Choir. Charlotte also served as the church secretary until she left to attend Virginia State College (University). Charlotte continued her education at Norfolk State College (University), receiving her BS degree in Elementary Education. As an elementary school teacher, her first assignment was in the Norfolk Public School district and she later moved to Chesapeake Public Schools where she retired on disability. She also worked for Maurice Collette Real Estate and Trucker's Rest Restaurant. Charlotte had a great personality and a great sense of humor. She was also very business minded and loved to organize everything and everybody. She tried to manage so much that her brother nicknamed her "Big Chief". She leaves to cherish her memory a special niece/daughter, Yolanda R. Barrow (Ray), grandson Orlando R. Barrow (Bryanna) great-grand daughter, Olivia. Sisters Hildegarde O. Richardson (Andrew) and Martha L. Shivers (Michael), sister-in-law, Cora P. Owens. Her nephews Phillip (Jessica) and Lewis, her niece Candace and a host of great nieces, nephews, cousins and friends.

The family of Charlotte White created this Life Tributes page to make it easy to share your memories.

Send flowers to the White family.