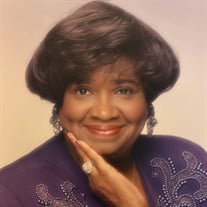 On, February 1, 2022, our lives on this Earth became a little dimmer as our mother, sister, aunt, cousin and friend, Catherine Miller Chambers was called home to be with the Lord. Catherine, a genuine servant of God, was a long-term resident of Chesapeake, VA. She was born in rural North Carolina in the township of Rocky Point, North Carolina, 17 miles from Wilmington, North Carolina to the late Reverend Lewis P. and Mary Miller. She was one of twelve siblings and faith was an important part of the Miller family. Catherine’s father, Rev. Miller, pastored a church for 35 years and three of her brothers and one sister were also ministers. Family was also an important part of the Miller family and Catherine made sure she stayed connected to all of her brothers and sisters. She participated in every Miller Family Reunion for 53 consecutive years. Catherine graduated from Pender County Training School and went on to graduate from North Carolina A & T State University with a Bachelor of Science in Business Education in 1961. In 1962 Catherine moved to Norfolk, VA and married the late James R. Chambers. She was married for 31 years until his passing in 1993 and they had two children, Victor Brian and Kathy Lynn. Catherine was a long-term term teacher for the Hampton Public School System, serving over 32 years. She began her teaching career in Hampton, VA at George P. Phenix High School. She eventually moved to Hampton High School where she taught business education for 27 years and was also a FBLA and Debate Club sponsor. She retired in 1997 as a proud Hampton High “Crabber”. In 1962, James and Catherine also became members of Second Calvary Baptist Church in Norfolk, VA. They raised their growing family in the church where she was an active member and tireless worker. She served in many roles in the church including Co-chair of Vacation Bible School, founding member of the Women’s Missionary Union, the Pastor’s Council, the Board of Christian Missions, the Building Renovation Committee, the Constitution Revision Committee, the Loyalty Dinner Committee, the New Members Committee and was a frequent church representative to the National Baptist Convention. Her most significant role though was the Chair of the Board of Christian Education and Chair of the HWB Walker Scholarship Committee. Catherine served in this role for more than 30 years and was most proud of being able to expand the number of scholarships given to cover every eligible graduating senior in the church. When she retired from teaching in 1997, Catherine went to work in the church office, continuing to put her administrative skills to use. Catherine was a lifetime member of the NAACP. She was also a member of the Zeta Phi Beta Sorority Inc., the Metropolitan Business and Professional Women’s Club and stayed active with the Red Hat Society. Catherine leaves to cherish her memories: a son, Victor (Earlean) Chambers of Springfield, VA and a daughter, Kathy (Jamey) Chambers-Jamerson of Chesapeake, VA; three grandchildren, Christian and Ian Chambers and Jalen Jamerson; two brothers, Dr. David Miller and Arthur (Robin) Miller; and a host of cousins, nieces, nephews, and other relatives and friends. Her husband, James R. Chambers, brothers, Robert Miller, Lewis P. Miller Jr., Freddie Lee Miller, Eddie Lee Miller, Christopher Miller, Jesse Miller, sisters, Mary Sykes, Evelyn Hall, and Irene Miller-Lay preceded her in death

On, February 1, 2022, our lives on this Earth became a little dimmer as our mother, sister, aunt, cousin and friend, Catherine Miller Chambers was called home to be with the Lord. Catherine, a genuine servant of God, was a long-term resident... View Obituary & Service Information

The family of Catherine Chambers created this Life Tributes page to make it easy to share your memories.

Send flowers to the Chambers family.