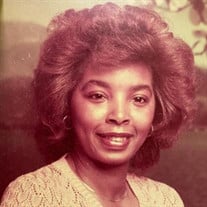 On Tuesday, August 3,2021, our beloved mother Carolyn Williamson Woodard peacefully went home to be with the Lord. Carolyn was born on November 10, 1937 in Portsmouth, Virginia to the late Mrs. Leona Cross and Solomon Cross. At an early age, Carolyn was introduced to the Gospel of Jesus Christ as she was a student at the Our Lady of Victory Catholic School where she graduated. While there, she participated in daily Bible study and prayer. During these years, Carolyn and her six siblings were faithful followers and visitors of Our Lady of Victory Catholic Church. After high school, Carolyn attended the school of practical nursing at Norfolk General Hospital. She began working at Norfolk General after graduating with a degree in Licensed Practical Nursing in April 1966. Carolyn was assigned to the Ambulatory Nursing Directorate, Branch Medical Clinic, Naval Air Station (NAS), Oceana, where she worked in the Immunizations and Military Sick Call Departments. She also worked in the OBGYN unit at the Portsmouth Naval Hospital. She retired after 31 years of distinguished service in which she received numerous accolades to include: Several Outstanding Performance Awards; two Meritorious Unit Commendations, selection as Naval Medical Center Portsmouth’s Civilian of the Quarter (Jul-Sep 91), selection as Branch Medical Clinic NAS Oceana’s Civilian of the Quarter, 4th quarter 1991, and nominee for Civilian of the Quarter, 4th quarter, 1997. Additionally, Carolyn participated in many professional and civic organizations to include: the National Federation of Licensed Practical Nurses, Inc., Neighborhood Police Community Relations, Donor Bone Marrow Drive Registry, Children’s AIDS Network, and the Lake Cavalier Corporation. In addition to her many professional accomplishments, Carolyn was a devoted wife, mother, sibling, and friend. She enjoyed traveling and spent many years after retirement traveling with her husband, Lester Woodard in Europe, South America, and all over the U.S. Carolyn always had a bubbly personality. She made friends wherever she went. You could always count on her to visit and bring joy and laughter to her family and friends. No one could put a smile on your face or laughter in your heart like Carolyn Cross Williamson. Throughout her life, Carolyn remained devoted to serving God. She was a lifelong member of Third Baptist Church in Portsmouth, Virginia. Before her extended illness, she remained faithful to the following auxiliaries: Trustee Wives Ministry, former president of the Sanctuary Choir (12 years), Crusaders and Mt. Hermon Ministries, Nurses Unit, and Feed the Hungry Ministry. She was also a member of the Sunday School and a Vacation Bible School helper. Carolyn’s death was predeceased by her husband, Shelton Williamson; and her loving daughter Robbin P. Williamson. She leaves to cherish her memory, her son, Carl V Williamson; sisters, Barbara C. Mann, Sandra Martin, Sylvia Davis, Delores Dudley, Gloria Jordan (Barry); brothers, Miles Cross (Ariminda), David Cross (Juanita), Cecil Cross (Diane) and Atlas Ingram (Chae); nieces, Crystal Briscoe (Hawk), Carol Reynolds (Darren): nephews, Michael Mann (Tanya), Mark Mann (Robin), Cynthia Duckett (Cowanis) and a host of cousins, nieces, nephews, great nieces, great nephews, step daughter, Candice Washington (Mario), step grandchildren, and many, many friends. A private funeral will be held at a later date with members of the family. In lieu of flowers and gifts, please make donations to Third Baptist Church,461 Godwin Street, Portsmouth, VA, 23704.

On Tuesday, August 3,2021, our beloved mother Carolyn Williamson Woodard peacefully went home to be with the Lord. Carolyn was born on November 10, 1937 in Portsmouth, Virginia to the late Mrs. Leona Cross and Solomon Cross. At an early... View Obituary & Service Information

The family of Carolyn Williamson Woodard created this Life Tributes page to make it easy to share your memories.

Send flowers to the Woodard family.