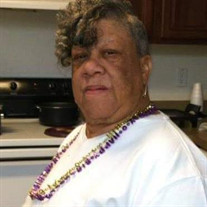 On Friday, July 30, 2021, God guided the sweet, caring, and gentle spirit of Brenda Ann Simmons-Freeman, affectionately known as “Brent,” to her eternal resting place, free from pain and suffering. Brenda was born December 16, 1947, to the late Margaret Thompson and the late Only D. Byrd. Brent left Piedmont, S.C. at an early age and moved to Brooklyn, N.Y., where she received her education. On February 16, 1966, while in New York, she met her “knight in shining armor,” Freddie Freeman. They both shared a passion for music. The two began writing music together, at which time Brent wrote “Your Touch Bring Back Memories,” Freddie’s number one hit. Brent worked in the Portsmouth Public School system, at Churchland Primary, as a custodian for ten years. She later retired. Her favorite things to do included attending yard sales, jigsaw puzzles, being an avid collector of salt-n-pepper shakers, playing cards, and attempting to win millions on daily lottery scratch-off tickets. However, her favorite moments were those when her family, especially her grandchildren, surrounded her. She was a beloved wife to Fred Freeman for 55 incredible years. She was an affectionate mother to Melissa McMillian, Dennis Freeman (Christy), and Chimere Freeman (Donte). She also leaves to cherish Fred Freeman Jr. (Faith), Troy Jones (Ethel), Michael Freeman, Frederica Green (Eric), Latonya Lynch, and Lamont Johnson, one sister, Ida Clark, and one aunt, Nellie Bolden (William). She was a loving grandmother to 26 grandchildren, whom she was incredibly proud of, including Latoya, Tyrell, Deshawn, DJ, Daijah, Denzel, Maurice, MarTayvius, Markhael. Brent leaves to cherish 31 great-grandchildren and a host of nieces, nephews, cousins, and friends. Her stepfather, David Simmons of Piedmont, S.C., her brother David Simmons Jr. of Brooklyn, N.Y., and her granddaughter Ka’Shara Branch of Portsmouth, V.A., precede her in death.

The family of Brenda Ann Simmons-Freeman created this Life Tributes page to make it easy to share your memories.

Send flowers to the Simmons-Freeman family.