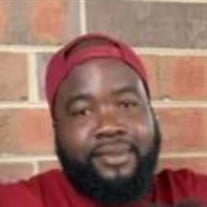 Brandon D. Edwards, 32, of Portsmouth, Va., was the son of Don Juan Covil (Tonja), and Keshia Edwards Franklin (Mario). He was predeceased by his grandmother Joyce Covil, his grandfather George Bell, and his great-grandmother, Doris McClenny.... View Obituary & Service Information

The family of Brandon Dravon Edwards created this Life Tributes page to make it easy to share your memories.

Send flowers to the Edwards family.